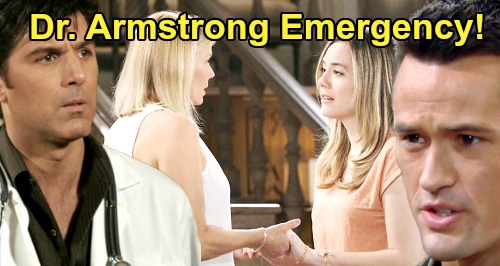 The Bold and the Beautiful (B&B) spoilers tease that extreme danger is on the way. Thomas Forrester’s (Matthew Atkinson) fixation on Hope Forrester (Annika Noelle) will bring some shockers. During the week of August 19-23, Thomas will put a plan in motion that could cause serious harm to at least one character. Let’s look at some clues and see if we can figure out what’s in store.

For starters, consider the timing of all this. Thomas’ plot will erupt in danger just before Dr. Jordan Armstrong (Vincent Irizarry) makes his The Bold and the Beautiful debut on Monday, August 26. That suggests the Friday August 23 cliffhanger before that will leave someone in bad shape. We should also mull over some hints Irizarry offered in an interview with TV Insider.

Irizarry said, “It’s recurring and I can say that it has to do with the baby reveal [that Phoebe is really Beth]. I’ll be playing opposite all the main characters. I’m looking forward again to working with Thorsten Kaye (Ridge), who I worked with on All My Children.”

We should break that down even further and see what other clues we can gather. Irizarry suggests it has to do with the baby reveal, but that doesn’t necessarily mean Beth Spencer (River Davidson and Madeline Valdez) is the patient. Irizarry may have just been saying that his role ties in with that story. Thomas’ actions are a result of Beth revelation coming out, so that still makes perfect sense.

If we keep that in mind, it opens up plenty of possibilities. Since Irizarry has since filmed these scenes and worked with Kaye, that lets us know Ridge is probably going to be fine. He wouldn’t have done much working with Irizarry if he were the patient.

The show made a big deal out of hiring Irizarry as Dr. Armstrong, so it seems we could be looking at a comatose character. A life-or-death situation! What was the point of bringing in a well-known soap name otherwise? It definitely sounds like the doc will have his work cut out for him as he works to save someone.

Since Ridge will apparently be quite involved, it’s possible Brooke Forrester (Katherine Kelly Lang) will be the injured party. The Bold and the Beautiful spoilers say Brooke will catch onto Thomas’ plan in the week ahead. She’ll rush to stop Thomas and save Hope, so that makes her a prime hospital candidate.

Of course, Thomas himself could get hurt in his own scheme. Would a dying Thomas perhaps spark some sympathy? That’s another option to consider. Hope is one more since Ridge would want to support Brooke if her daughter was hurt.

There’s also a chance Liam Spencer (Scott Clifton) could get involved here and end up in a hospital bed. Ridge would certainly still show his support for Liam. Even Steffy Forrester (Jacqueline MacInnes Wood) might be a possibility if she somehow thinks she can get through to Thomas.

The point is Dr. Armstrong’s baby storyline connection may be a bit deceiving. This is still the baby story. The adults are battling it out in the aftermath, so that’s clearly still part of the plot. We know Irizarry suggested he’d be open to sticking around in case “other ailing people” need a doctor on B&B. Someone will indeed be ailing here – perhaps even more than one character if things get truly ugly!