The Bold and the Beautiful Spoilers: Brooke Races to Save Hope from Thomas – Evil Plan Brings Mother-Daughter Danger 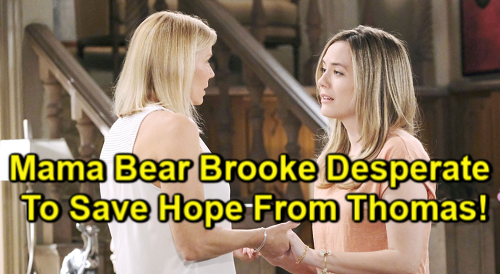 The Bold and the Beautiful (B&B) spoilers tease that Thomas Forrester (Matthew Atkinson) will make some shocking moves in his quest to get Hope Forrester (Annika Noelle) back.

He never really had her since their marriage was based on lies and manipulation, but that won’t stop Thomas. B&B fans can expect another crazy scheme as Thomas loses his grip on reality and spirals out of control.

During the week of August 19-23, Ridge Forrester (Thorsten Kaye) will fret over his children. He’ll remain worried about Steffy Forrester (Jacqueline MacInnes Wood), but he’ll have to face Thomas’ issues as well. It looks like Ridge will accept that Thomas is deeply disturbed and needs serious help. Of course, things will get far worse before they get better!

Thomas Forrester Is Just Waiting For Perfect Moment To Strike

Thomas will remain in hiding until he finds the perfect moment to strike. After hearing about Hope’s plans for the future – a future without him – Thomas just won’t be able to sit back and do nothing. He’ll have a strategy to get Hope away from Liam for good. Thomas will think it’s the one and only solution here, so a Liam murder plot may be in the works.

Regardless, Hope will continue to be a target. She’s not going with Thomas willingly, so kidnapping is his only option. Thomas may set a trap for Hope, but someone will soon pose a threat to his plot. That someone is none other than the protective mama bear herself, Brooke Forrester (Katherine Kelly Lang). She’ll somehow become privy to Thomas’ intentions, so she’ll freak over the danger to her daughter.

The Bold and the Beautiful spoilers say Brooke will try to get her emotions under control quickly – or at least use them to fuel a plan of her own. She’ll be furious and fearful, but she’ll have some powerful feelings to push this mission forward.

Desperate Race Against Time To Save Her Daughter From Villain

Even so, Brooke will need to keep a clear head here. She’ll be in a desperate race against time as she sets out to find Hope and save her from Thomas’ evil clutches.

Will Brooke land in danger as a result? Could she inadvertently get injured? If Thomas hurts Ridge’s wife, that could completely turn him against his son. Whatever the case, The Bold and the Beautiful spoilers say the excitement’s about to rev up.