The Bold and the Beautiful Spoilers: Shauna Learns Thomas’ Secret Hope Plan – Torn Between Spilling and Getting Ridge 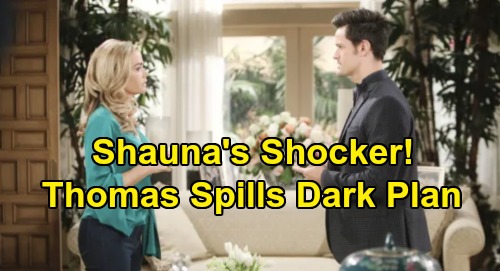 The Bold and the Beautiful (B&B) spoilers tease that Thomas Forrester (Matthew Atkinson) will put his own plan in jeopardy. Overconfidence could become a real problem for Thomas if he’s not careful! Nevertheless, Thomas will be as smug as ever when he comes clean to Shauna Fulton (Denise Richards). He’ll gloat about his scheme to be with Hope Logan (Annika Noelle) and note that everything’s falling into place for him.

Shauna may point out that she could spill Thomas’ plot to Ridge Forrester (Thorsten Kaye). She may wonder why Thomas is telling her all this. However, Thomas will assure Shauna she’s not going to blab. He’ll feel certain that Shauna’s desire for Ridge will win out over her desire to tell him the truth.

After all, coming clean would prove Brooke Forrester (Katherine Kelly Lang) right. Shauna would be leading Ridge right back into Brooke’s arms – and Thomas just won’t believe she’s going to do that. He’ll probably have a specific reason for sharing his plot though. Thomas won’t be concerned about the risk here, but there’s surely a motive for taking it. That motive may be using Shauna to his advantage.

The Bold and the Beautiful spoilers say Brooke will grow increasingly worried about Thomas and what he’s capable of. She’ll warn Ridge that Thomas is not only obsessed with Hope now; he’s obsessed with Brooke, too – at least in a way. B&B fans know that’s accurate since Thomas fantasized about Brooke’s death!

Brooke will contend that Thomas wants rid of her and will do anything to make sure she’s not by Ridge’s side. She’ll want Ridge to see that keeping them apart is what Thomas wants. Ridge may argue that Thomas is genuinely upset over the drama he’s caused in their marriage, but Brooke just won’t buy that. She’ll think they all have so much to fear when it comes to Thomas and that twisted brain of his.

As for Shauna, Thomas may recruit her for the next part of his plan. He’s pushed Shauna to go after Ridge before, but he may rev up his efforts. Thomas might feel like if Shauna can just get Ridge into bed, it’ll break “Bridge” for good. He won’t want Brooke around to poison everyone against him. The further away Brooke is from the Forrester clan, the better.

The Bold and the Beautiful spoilers say Shauna will be torn about what to do. Part of her will want to confess everything to Ridge, but another part of her won’t want to throw away her shot. It sounds like some hot drama’s ahead, so stay tuned. We’ll give you updates as other B&B news comes in. Stick with the CBS soap and don’t forget to check CDL often for the latest Bold and the Beautiful spoilers, updates and news.