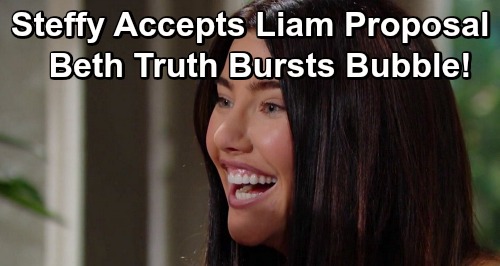 The Bold and the Beautiful (B&B) spoilers tease that Liam Spencer (Scott Clifton) will quickly grow closer to Steffy Forrester (Jacqueline MacInnes Wood). He’s finding his groove with Steffy again and thriving as a wonderful father to the girls. Liam was always going to be there for Kelly Spencer (Zoe Pennington and Chloe Teperman), but he’s incredibly grateful to have added “Phoebe Forrester” (River Davidson and Madeline Valdez) as a daughter, too.

Of course, Liam doesn’t realize “Phoebe” is Beth Spencer, his biological child. It provides even more of an explanation for why Liam feels like a dad to this sweet little girl. The Bold and the Beautiful spoilers say Kelly and “Phoebe” could be the catalyst for Liam’s next big move. He could have something big up his sleeve in the coming months.

Now that Steffy and Liam are living under the same roof, it won’t be long until things head in a more romantic direction. Liam’s love for his family will undoubtedly fill his heart with happiness. He’ll probably be bursting with joy over how complete he feels. Hope Logan (Annika Noelle) feels a void without Beth, but Liam will have her right there in his arms – even if he doesn’t realize it.

Liam will still feel bad about how his marriage to Hope turned out, but he may choose to embrace his new beginning. After all, it’s what Hope wanted. The next logical step for Liam would be to pop the question. The Bold and the Beautiful spoilers tease Liam might plan a surprise proposal for Steffy and suggest that they were meant to be together. There’s been a lot of talk about destiny on B&B lately, so it may be Liam’s turn to make that claim.

Steffy might worry about Liam being on the rebound or rushing back into this. She may want to make sure he’s truly all in on their future. Naturally, Liam would confirm that he is. He may think they both deserve to move forward as a family and have the life they once dreamed of.

The Bold and the Beautiful spoilers say Steffy could find herself on cloud nine, which is exactly when she should be worried. Will Liam and Steffy’s engagement set up the worst blow Steffy could imagine? Will it happen just before Steffy discovers the awful truth about her adopted daughter? B&B may let Steffy think she’s going to have it all and then rip it all away in an instant.

Perhaps a newly engaged Steffy will be forced to make an excruciating choice. Will she sacrifice her own happiness for Hope or keep her mouth shut to protect her family? Since this is a soap that likes to maximize drama, we’d say it’ll be the latter!