The Bold and the Beautiful Spoilers: Wednesday, June 19 Update – Steffy Insists Phoebe Is a Logan – Thomas Shuts Up Xander

BY Heather Hughes on June 19, 2019 | Comments: one comment
Related : Soap Opera, Spoiler, Television, The Bold and the Beautiful 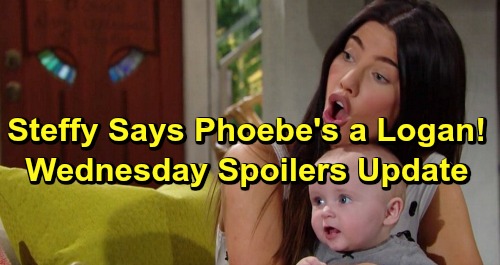 The Bold and the Beautiful (B&B) spoilers update for Wednesday, June 19, tease that Thomas Forrester (Matthew Atkinson) will try a little more manipulation. Hope Logan (Annika Noelle) can tell that something’s up with Thomas, so she just pushed him to share what’s on his mind. She’s hoping Thomas will be honest about what’s upsetting him, which could help their bond grow and allow trust to develop.

Unfortunately, Thomas can’t come clean about Beth Spencer’s survival. At least he can’t if he wants a future with Hope! The Bold and the Beautiful spoilers say Thomas will keep quiet about Hope’s baby and shift her attention elsewhere. He might suggest that Douglas Forrester (Henry Joseph Samiri) has been missing Caroline Spencer (Linsey Godfrey) even more lately.

Thomas might guilt-trip Hope into feeling like she’s not spending enough time with the tot. Then again, Thomas might use his own pining to his advantage. He may contend that he’s lovesick and lonely, which is affecting his mood. Thomas will say pretty much anything if he feels it’ll bring him a step closer to winning Hope over. He might make some progress due to his latest sneaky strategies.

However, Xander Avant (Adain Bradley) won’t approve of Thomas’ tactics at all. He’ll think it’s disgusting for Thomas to manipulate Hope, especially knowing what he knows now. Xander will feel like Thomas is exploiting the secret and behaving cruelly. He’ll once again want to come clean, but Thomas will insist that’s not happening.

B&B spoilers say Thomas will deliver a stern warning to Xander and anyone else who gets out of line. He’ll make it clear that nobody will like the dire consequences of blabbing. Thomas is growing darker every day, so he undoubtedly means his threat. In fact, it seems Thomas will be at least partially responsible for the shocking death that’s brewing.

Across town, Florence “Flo” Fulton (Katrina Bowden) will remain in a tricky situation. She’s been forced to face Steffy Forrester (Jacqueline MacInnes Wood), which has naturally stirred up some guilty feelings. That trend will continue as Steffy goes on and on about “Phoebe Forrester” (River Davidson and Madeline Valdez) being a Logan. Steffy may see some Logan-ish qualities in her adopted daughter.

Flo will agree that the kid’s definitely a Logan girl, but she’ll have a different reason for thinking so. She knows “Phoebe” is actually Beth, so she’ll see a lot of Hope in her. Flo will feel awful for deceiving Hope, but she’ll see how much damage this would bring to Steffy’s life, too. This mess will really take a toll on Flo, but she may decide it’s more crucial than ever to keep quiet.