The Bold and the Beautiful Spoilers: Thomas Proposes to Married Hope – Insists Caroline Wanted Her to Raise Douglas

BY Heather Hughes on May 3, 2019 | Comments: one comment
Related : Soap Opera, Spoiler, Television, The Bold and the Beautiful 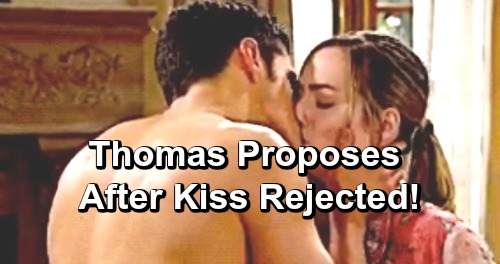 The Bold and the Beautiful (B&B) spoilers tease that Thomas Forrester (Matthew Atkinson) will make another shocking move. He’ll soon propose to a married woman…well, sort of! Allow us to explain. The trouble will start after Hope Spencer’s (Annika Noelle) adverse reaction to Thomas’ kiss. She’ll remind Thomas that she’s married, but that won’t deter him from taking it a step further.

Thomas will once again make the pitch for Liam Spencer (Scott Clifton) to be with Steffy Forrester (Jacqueline MacInnes Wood) and the girls. He’ll think they all belong together for good, which would leave Hope free to move on with him. Thomas will suggest that Hope shouldn’t fight how she’s feeling. He’ll contend that he can be there for her along with Douglas Forrester (Henry Joseph Samiri).

Then, Thomas will play the dead Caroline Spencer’s (Linsey Godfrey) wishes card. He’ll claim that Caroline told him if anything happened to her, she’d want Hope to raise Douglas. Thomas will insist Caroline wanted Hope to take her place. Hmm…we don’t buy it and Hope won’t either. She’ll question why Caroline would request that, and we betting she never did at all.

Nevertheless, Thomas will continue his speech and argue that Hope doesn’t have to give up on being a mom. She can be one to Douglas and accept Thomas’ love, too. The Bold and the Beautiful spoilers say Thomas will lay it on thick and try to show Hope that they can be a real family.

Thomas will even contend that parents have to put their children’s needs before their own. He’ll feel like Hope has to do that for the sake of Kelly Spencer (Zoe Pennington and Chloe Teperman), “Phoebe Forrester” (Isabella de Armas and Rosalind Aune) as well as Douglas. Thomas will add that he loved Hope years ago and that hasn’t changed.

That brings us to that almost proposal. Thomas will promise to wait for Hope if he has to, but he’ll let her know this is real and what he wants. He’ll pull out the engagement ring from back when he proposed in Cabo – which was also part of a scheme to manipulate her. Of course, Thomas won’t mention that part!

Instead, Thomas will point out that he knows Hope isn’t there yet, but he’ll want her to see how committed he is. In other words, Thomas will propose with the understanding that his offer may be accepted much later. Naturally, B&B fans can expect Hope to be completely bewildered. She’ll be baffled by Thomas’ sudden pressure and wonder what in the world’s happening right now.