The Bold and the Beautiful Spoilers: Who’s A Better Match For Wyatt – Flo or Sally? 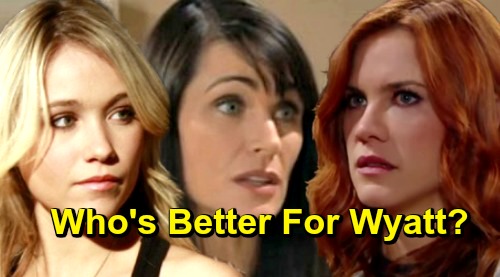 The Bold and the Beautiful spoilers tease that Wyatt Spencer (Darin Brooks) may soon do some soul-searching where his relationship status is concerned. Wyatt is currently in a relationship with Sally Spectra (Courtney Hope), and until recently, things were solid between them. But some recent and pending events are going to give Wyatt some pause about his girlfriend.

First off, Florence “Flo” Fulton (Katrina Bowden) has come back into Wyatt’s life. Flo and Wyatt have kissed a couple times, and Wyatt’s stated that a part of him will always love Flo. Wyatt’s mom, Quinn Forrester (Rena Sofer) would like nothing more than for Flo and Wyatt to get back together, so there’s a lot of pressure on Wyatt to make that happen.

Plus, B&B spoilers say that Wyatt will soon learn something disturbing about Sally. He’ll discover that Sally and her ex, Thomas Forrester (Matthew Atkinson) are texting with each other and referencing a “secret” between them. Of course, there will be a logical explanation for this, but Wyatt will jump to all the wrong conclusions and assume that Sally and Thomas are having an affair.

The Bold and the Beautiful spoilers indicate that from there, Wyatt will head straight to Flo for comfort. He’ll ask Flo out for dinner, and the two will again lock lips. Eventually Sally will come clean with Wyatt about the big secret she’s been keeping with Thomas. As B&B viewers know, Thomas confided in Sally about his plot to break up Hope Spencer (Annika Noelle) and Liam Spencer (Scott Clifton), so Wyatt will be relieved to know that Sally isn’t cheating on him.

But at that point, Wyatt will be in an interesting position. He loves Sally, but he’s clearly also interested in Flo, at least on some level. And that has us thinking…who would be better for Wyatt? Sally or Flo?

Well, on the one hand, Sally and Wyatt seem like a good, easygoing couple. They each have strong work ethics and are driven in their jobs, which means that they have a lot in common. When things are going well between them, they have a solid relationship. But they do have a problem…Quinn. Quinn would rather that Wyatt be with Flo, and she’s now determined to destroy his relationship with Sally.

It will be hard going forward for Wyatt and Sally to maintain their carefree relationship, now that Quinn is against them. She seems to delight in getting under Sally’s skin, and this will probably strain “Wally’s” relationship going forward.

And then there’s Flo. Flo and Wyatt have history and a deep bond between them. They were high-school sweethearts, and so they’ll always share a special connection. Even though they haven’t been in contact in recent years, they know each other pretty well, and in all honesty, Quinn is probably right that they’d be a good couple.

Wyatt and Flo also share similar upbringings, and their values are probably in line. Plus, it seems like Flo is quite interested in getting back together with Wyatt, given that she’s planted several kisses on him so far. But Flo’s got a big secret regarding Hope and Liam’s baby. Once

the truth comes out that Flo was a vital part of Reese Buckingham’s (Wayne Brady) baby switch and adoption scam, Wyatt might want nothing to do with her.

On the other hand, Wyatt’s pretty forgiving – after all, he was one of the first people to forgive Bill Spencer (Don Diamont) after Bill plotted to keep Liam and Steffy Forrester (Jacqueline MacInnes Wood) apart. Once Flo’s terrible truth comes out, he may actually console her and offer her support.

At any rate, Wyatt could end up with Flo down the line if things do go south with Sally. It’s probably a toss-up at this point who he’ll ultimately end up with. Who do you think is a better match for Wyatt? Sally or Flo? Stay tuned to the CBS soap and don’t forget to check CDL often for the latest Bold and the Beautiful spoilers, updates, and news.