The Bold and the Beautiful Spoilers: Steffy and Hope’s Competition Spirals Out of Control – Feud Explodes Thanks to Thomas’ Plot 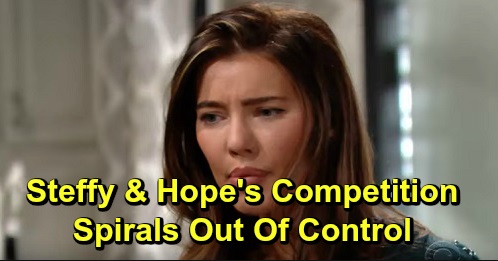 The Bold and the Beautiful (B&B) spoilers tease that Thomas Forrester (Matthew Atkinson) will face off with his sister. He’ll get into a heated argument with Steffy Forrester (Jacqueline MacInnes Wood) – and Hope Logan (Annika Noelle) will be at the center of the conflict. Steffy may have some harsh words about the object of Thomas’ desire. It’s clear that Thomas is still completely obsessed with Hope, so he may not appreciate Steffy’s trash talking.

However, it’s also possible Steffy will just try to be the bigger person and protect Liam Spencer’s (Scott Clifton) relationship. She’d undoubtedly like to have Liam back for herself, but she may remind Thomas that Hope’s heart isn’t up for grabs. Steffy might believe it’s the right thing to do under the circumstances.

Of course, Thomas isn’t someone who’s afraid of a fight, so he’ll speak his mind and let Steffy know she needs to stay in her lane as well! Thomas certainly won’t want Steffy interfering with his plan to win Hope over. The Bold and the Beautiful spoilers say Thomas will move forward with a new plot, which will involve several different phases.

It looks like this is all building toward a major fashion competition, which will pit Hope and Steffy against each other. During the week of December 9-13, B&B fans can expect their lengthy rivalry to come into play. Steffy and Hope’s complicated history will rev up the hostility, so both their feud and the fashion competition should explode.

Thomas may be rooting for Liam Spencer (Scott Clifton) to take Steffy’s side and be the one she leans on in the aftermath. As for Hope, Thomas will think he can take care of all her needs. Liam had better watch out since Thomas’ obsession could drive him to pull off some wild shockers!