The Bold and the Beautiful Spoilers: Sally’s Ominous Hint About Possible Death – Will She Be Sacrificed After Flo’s Return? 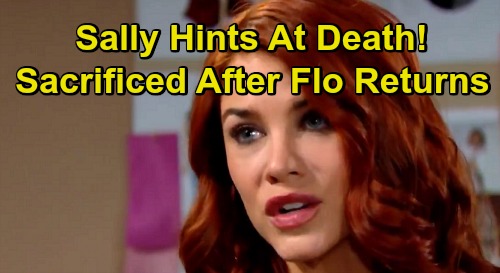 The Bold and the Beautiful (B&B) spoilers tease that Sally Spectra (Courtney Hope) could face deadly danger. Before we get to that, let’s consider B&B’s cast for a moment and the couples they’re most likely gearing up for. Will there still be a place for Sally once everyone’s paired up with his or her next love interest? The Bold and the Beautiful has never made Sally a real priority.

It’s clear that the show’s all about Hope Logan (Annika Noelle), Steffy Forrester (Jacqueline MacInnes Wood) and when she’s on, Florence “Flo” Fulton (Katrina Bowden). Bowden’s been busy filming a movie in Australia, but she’ll be back onscreen before you know it – her return to B&B is confirmed. These are the younger female characters that B&B seems to prioritize, which could mean bad news for Sally down the road.

We’ve got Steffy, who seems poised for a reunion with Liam Spencer (Scott Clifton) based on their many bonding scenes. We’ve also got Thomas Forrester (Matthew Atkinson), who’s obsessed with Hope and stands a good chance of actually winning her over. There’s also Wyatt, who’s struggling with his commitment to Sally and will inevitably be drawn back to his high-school sweetheart, Flo.

Where does Sally fit in all that? Nowhere at all. Where do characters without love stories go? On the backburner or off canvas completely. Bottom line, Sally’s future at B&B isn’t looking great right now. That brings us to some rather ominous dialogue, which is coming up on December 3.

After accidentally calling Wyatt “Liam” in the episode before, Sally will assure Wyatt it was nothing. She’ll insist it was a simple slip of the tongue and let Wyatt know he’s the only man for her. After Wyatt turns down Sally’s idea about eloping in Vegas that afternoon, things will settle down. They’ll share a kiss, and Sally will make a promise that’s…well, kind of scary.

Sally will contend that they’re going to be OK, even if it kills her. Wait, what?! Why would it kill Sally to make sure they’re OK? It’s just such a strange way of putting it. There’s a chance it’ll end up being nothing, but it’s definitely a weird comment that’s worth considering.

Could this be a hint about Sally’s grim fate? As we mentioned, there doesn’t seem to be a place for her in terms of looming romances. We should also point out that The Bold and the Beautiful has been able to get ratings boosts with shockers. Every couple months, they like to bust out a car crash, a rooftop altercation, a cliff fall, an acid vat, etc. This formula is working for them in terms of getting people to tune in.

Will B&B sacrifice Sally for shock value? Could she die or at least have a near-death experience? The Bold and the Beautiful spoilers say some hot drama’s ahead no matter what! We’ll give you updates as other B&B details emerge. Stick with the CBS soap and don’t forget to check CDL often for the latest Bold and the Beautiful spoilers, updates and news.