BY hellodrdavis on December 2, 2019 | Comments: one comment
Related : Soap Opera, Spoiler, Television, The Bold and the Beautiful 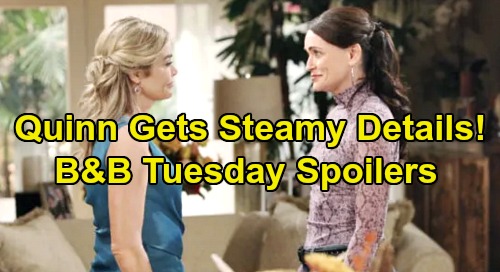 The Bold and the Beautiful spoilers for Tuesday, December 3, tease that Quinn Forrester (Rena Sofer) will get an eyeful. As B&B viewers know, Ridge Forrester (Thorsten Kaye) and Shauna Fulton (Denise Richards) are canoodling in the Forrester living room. Shauna has just told Ridge that she loves him and the two have shared several steamy kisses.

It looks like Ridge will soon leave, but not before Quinn comes along and spies him and Shauna kissing. That will, of course, pique Quinn’s curiosity and she’ll want to hear all the details from Shauna. Quinn will need to get the whole scoop, including how Ridge walked out on his marriage to Brooke Forrester (Katherine Kelly Lang), which will be shocking in its own right. And then she’ll hear all about how Shauna’s been supporting Ridge and how the whole attraction developed.

Of course, Quinn may offer some words of caution to Shauna, since she knows Brooke pretty well. Quinn’s probably well-aware that Brooke won’t just easily bail on her marriage to Ridge. However, Quinn also likely knows from Eric Forrester (John McCook) just how difficult things are right now between Brooke and Ridge. Sure, they’ve had problems before and have always worked through them, but they’ve never experienced friction like they have concerning Thomas Forrester (Matthew Atkinson).

And given that Brooke recently told Donna Logan (Jennifer Gareis) and Katie Logan (Heather Tom) that she was never going to forgive Thomas no matter what, things aren’t looking good for a “Bridge” reconciliation. Chances are, Quinn and Shauna will hash all this out while they talk, and Shauna will probably let Quinn know that she professed her love for Ridge and intends to fight for him.

Meanwhile, on the new episode of B&B on Tuesday, December 3, Ridge will find himself daydreaming about Shauna once he and Shauna part company. They had some steamy moments between them, and since Shauna openly declared her love, she’ll be at the forefront of his mind. As B&B viewers know, Ridge and Shauna decided to take things slowly as far as intimacy goes, but that doesn’t mean that Ridge can’t dream!

Finally, Wyatt Spencer (Darin Brooks) will need to have a serious conversation with Sally Spectra (Courtney Hope). She just referred to him by his brother Liam Spencer’s (Scott Clifton) name, which really rubbed Wyatt the wrong way. Sally didn’t even realize that she called him Liam, and now Wyatt feels that they have to address the issue.

According to The Bold and the Beautiful spoilers, Wyatt will question Sally, which likely means that he’ll probe her feelings to see if she still has a deep-down attraction toward Liam. Of course, it’s been a couple years since Liam and Sally shared a kiss, and that attraction seems totally over and done with, but still there could be some lingering feelings there. Wyatt will want to get to the bottom of what’s going on.

As Wyatt stated to Liam, Bill Spencer (Don Diamont), and Justin Barber (Aaron D. Spears), he’s had this nagging feeling that something is holding Sally back from planning the wedding and moving forward with him. Now that Sally slipped and called Wyatt by Liam’s name, it looks like Wyatt may put the brakes on his engagement to Sally, as B&B spoilers for Tuesday’s episode say that Wyatt will make a big declaration about his future.