The Bold and the Beautiful Spoilers: Brooke Forgives Thomas But It’s Too Late – Ridge Moves On With Shauna?

BY hellodrdavis on December 2, 2019 | Comments: one comment
Related : Soap Opera, Spoiler, Television, The Bold and the Beautiful 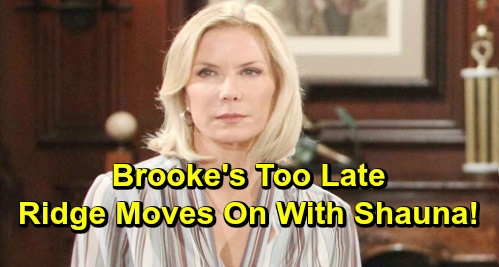 The Bold and the Beautiful (B&B) spoilers tease that Ridge Forrester (Thorsten Kaye) will have a big request to make of Brooke Forrester (Katherine Kelly Lang). Ridge seems to be serious about the prospect of divorcing Brooke, and he meant it when he told her goodbye in that emotional scene a while back. As B&B viewers know, Ridge just couldn’t tolerate it that Brooke was willing to withhold information from him about Thomas Forrester’s (Matthew Atkinson) terrible accident and supposed death.

Of course, Thomas didn’t die and he’s just fine, but an entire day went by when Brooke was under the impression that Thomas was dead, and she deliberately didn’t tell Ridge about it. That, combined with Brooke’s long-standing animosity toward Thomas, was the last straw for Ridge and he became ready and willing to walk away from the marriage.

But it looks like after Ridge gives the matter some thought, he’ll offer Brooke one more chance to save their marriage. According to B&B spoilers, Ridge will come to Brooke with divorce papers in hand and tell her that the marriage can be saved, but only if she forgives Thomas. But will Brooke go for this? It seems like it would be completely out of character for Brooke to just relinquish her anger toward Thomas.

Brooke has really dug her heels in when it comes to Thomas and refuses to see anyone’s side but her own on the matter. She hasn’t been willing to forgive Thomas before in order to save or protect her marriage, so will she really do so now? We think it’s likely that she’ll refuse Ridge’s request, although time will tell exactly what happens here.

But if Brooke does refuse to forgive Thomas, then it looks like Ridge will insist that Brooke sign the divorce papers right then and there. And if she signs them, then Ridge will be a free man, and he’ll probably do the predictable thing and run right to Shauna Fulton (Denise Richards) for support. As B&B viewers know, Ridge and Shauna have gotten very close lately and have shared several kisses.

And according to B&B spoilers, Shauna will soon lay everything on the line and tell Ridge that she loves him. She’ll no longer be just flirting; she’ll probably be full-on after Ridge. And if Brooke does sign those divorce papers, that will give Ridge the “permission” he needs to get closer to Shauna. He could even end up sleeping with her at that point.

And once that happens, it will really be a game changer. After all, divorce papers can be ripped up and proceedings can be stopped, but one can’t take back sleeping with someone. Even if Brooke were to, say, change her mind later about forgiving Thomas, it’s possible that Ridge will have already moved on with Shauna and will have started an intimate relationship with her. That would probably preclude any possible reconciliation between Brooke and Ridge.

We’ll see what happens here, but there’s probably a high likelihood that even if Brooke refuses Ridge’s request to forgive Thomas and signs the divorce papers, she could change her mind later. The only question is – will it be too late by that point?

What do you think will happen here? Are Brooke and Ridge done for good? Stay tuned to B&B and don’t forget to check CDL often for the latest Bold and the Beautiful spoilers, updates, and news.