The Bold and the Beautiful Spoilers: Steffy and Liam’s Reunion Fails – Heartbreak Waits For Steam

BY Heather Hughes on June 8, 2019 | Comments: one comment
Related : Soap Opera, Spoiler, Television, The Bold and the Beautiful 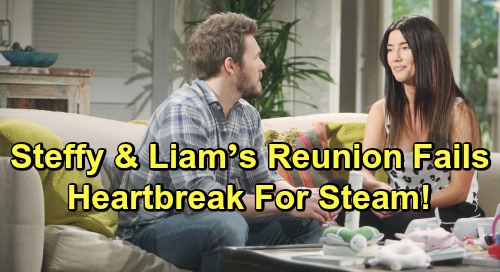 The Bold and the Beautiful (B&B) spoilers tease that Steffy Forrester’s (Jacqueline MacInnes Wood) feelings for Liam Spencer (Scott Clifton) will grow stronger but the “Steam” reunion is doomed to fail. Liam’s feelings will rev up as well as they continue bonding as a family. The more time Liam spends with Steffy and the girls, the more he’ll start to think Hope Spencer (Annika Noelle) was right. Liam will feel like he’s right where he belongs.

During the week of June 10-14, Liam will accept Steffy’s offer to move back in and be a full-time father. He’ll be excited about seeing Kelly Spencer (Zoe Pennington and Chloe Teperman) and “Phoebe Forrester” (River Davidson and Madeline Valdez) more often. Liam will love being there for every little moment and milestone. He won’t miss anything once he’s under the same roof with the fam.

Everything will seem pretty perfect, especially as Steffy and Liam’s love for each other comes rushing back. It never really left in the first place; it’s just been buried for a while. Unfortunately, it’s probably safe to say this “Steam” reunion is doomed – and there are three reasons why.

For starters, Liam and Hope Spencer (Annika Noelle) have unresolved feelings. They didn’t get an annulment because they fell out of love or had any kind of animosity toward each other. There was no epic conflict that destroyed them. Hope and Liam’s marriage crumbled because they lost Beth Spencer. Everything that’s happened since that night on Catalina Island has led them to this point.

That brings us to reason number two for “Steam’s” tragic fate. Steffy currently has no idea she’s raising Beth as “Phoebe,” but she will eventually. It’s tough to believe Steffy will come forward when she’s got so much to lose. Steffy loves “Phoebe” like her own daughter and will finally have her happy family with Liam. She won’t want to screw that up, so she’ll inevitably keep her mouth shut.

Some fans don’t want to believe Steffy would do something like that, but this is a soap and that’s what soaps do. There’s no way The Bold and the Beautiful can pass up the drama here. Steffy’s secret-keeping will reignite her rivalry with Hope in a big way.

If Steffy just came clean and handed the kid over, Hope would hug her and be grateful. Yawn. If Steffy keeps her mouth shut, Hope can rip into her when the truth comes out. It’ll give us powerful episode after powerful episode of heartbreaking rage.

Likewise, Steffy’s decision to stay quiet should ruin her happiness with Liam. By trying to keep her family intact, she may tear it apart. Of course, that just leads us to reason three why Liam and Steffy’s latest reunion is doomed. TPTB at B&B ALWAYS make sure “Steam” ends up right back at this place of destruction.

History’s going to repeat itself, but all hope isn’t lost. Is there even such a thing as endgame on a soap? Couples almost always circle back around as the months and years go by, especially on B&B. This particular round of “Steam” isn’t going to work, but that doesn’t mean they won’t get back together down the road.