BY Heather Hughes on November 13, 2019 | Comments: one comment
Related : Soap Opera, Spoiler, Television, The Bold and the Beautiful 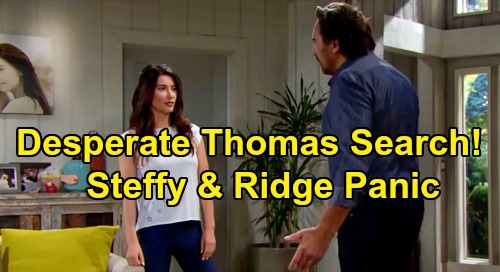 The Bold and the Beautiful (B&B) spoilers tease that Steffy Forrester (Jacqueline MacInnes Wood) and Ridge Forrester (Thorsten Kaye) will worry that Hope Logan (Annika Noelle) was right. They’ll find out about Thomas Forrester (Matthew Atkinson) pushing Hope to sleep with him as part of the adoption deal, so that’ll be quite troubling. Ridge and Steffy certainly won’t approve of Thomas’ quid pro quo here.

Of course, Steffy and Ridge won’t think Hope’s manipulation was right either, but they won’t give Thomas a pass. Once they’re convinced that Thomas indeed tried to pressure Hope into bed, they’ll realize he still has deep issues. Brooke Forrester (Katherine Kelly Lang) will make sure they focus on Thomas’ problems. She won’t want them discovering Thomas’ presumed death or Hope’s role in it.

However, Brooke’s attempt to throw only Thomas under the bus could backfire. That’s because Ridge and Steffy will be seriously concerned about Thomas’ mental health. They’ll view Thomas’ ordeal with Hope as incredibly disturbing. Ridge and Steffy won’t want to just leave Thomas off on his own somewhere. They’ll feel like Thomas needs genuine professional help, so they’ll become even more determined to find him.

Brooke might push Ridge to leave this alone and let Thomas be. She may argue that a fresh start away from Hope is exactly what Thomas needs. Ridge has repeatedly insisted Thomas will never be dead to him, so he won’t just give up on his son. He may remind Brooke that family has to stick together, even when things look bleak.

Ridge might wonder if Brooke would just forget Hope if she vanished – especially if she needed help for mental issues. Douglas Forrester (Henry Joseph Samiri) will also be a factor since he’s already lost one parent. The Bold and the Beautiful spoilers say the pressure will definitely be rising for Brooke and Hope, who’ll be on the verge of falling apart over her horrible guilt. Hope will feel like she’s living a nightmare that she just can’t wake up from.

B&B fans can expect some desperate moves and dangerous decisions. The Bold and the Beautiful spoilers reveal that Thomas isn’t actually dead, so that’ll add another layer of excitement as he plots Logan devastation! We’ll give you updates as other B&B news comes in. Stay tuned to the CBS soap and don’t forget to check CDL often for the latest Bold and the Beautiful spoilers, updates and news.