The Bold and the Beautiful Spoilers: Thomas Insists Hope and Brooke Must Pay – Vengeful Victim Alive and Plotting Logan Destruction

BY Heather Hughes on November 12, 2019 | Comments: one comment
Related : Soap Opera, Spoiler, Television, The Bold and the Beautiful 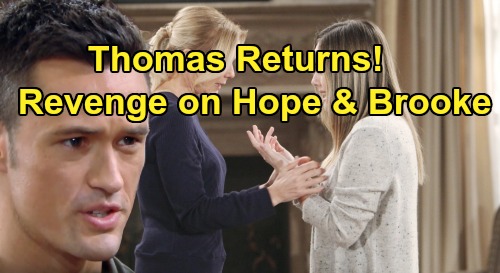 The Bold and the Beautiful (B&B) spoilers tease that Thomas Forrester (Matthew Atkinson) will do some plotting. That’s right! Thomas is alive and kicking, so he’ll be back to scheming as usual during the week of November 18-22. Naturally, Thomas won’t let Hope Logan (Annika Noelle) and Brooke Logan (Katherine Kelly Lang) know that! He’ll scheme behind the scenes for now and hope his grand plan pays off.

B&B fans know Thomas previously vowed to rid the Forresters of the Logans, so he’ll get back to that goal. He got caught up in his fantasy of a future with Hope again, but he’s seen the light now – at least in a way. Thomas is clearly still unstable and in need of some help for his issues, but he’s apparently done with all his Hope dreaming. He’ll officially return to his Logan destruction plot, but what will his first move be?

There’s no word yet on exactly what Thomas will pull, but you can bet it’ll be sneaky and rattle the Logan women. Thomas will undoubtedly use Hope’s guilt to his advantage. He’ll realize Hope thinks she’s killed him, so that’s something he can work with. It’ll be easy for Thomas to “haunt” Hope and make her wonder what’s going on.

Hope might get messages from the “beyond” and be left rattled by them. She may find herself questioning if Thomas is alive or perhaps truly haunting her in the ghostly sense. The Bold and the Beautiful fans will recall that Thomas once projected a ghost on the wall to scare Douglas Forrester (Henry Joseph Samiri). It was all part of his original plan to manipulate Hope using Douglas.

Hope did a little manipulating of her own through her adoption paper plot, and she’s about to pay the price along with Brooke. Thomas might think back on his ghost stunt and decide he should be a ghost to Hope, too. Of course, the show would certainly go for something less cheesy this time! B&B became a bit of a laughingstock with fans over that scene. We’re talking about something far more realistic.

This would be a different situation where Thomas could slowly gaslight his former love. Hope might find little clues planted by Thomas or a secret helper like Vincent “Vinnie” Walker (Joe LoCicero) or Zoe Buckingham (Kiara Barnes). There could be eerie reminders left around that leave Hope deeply disturbed.

Since Brooke and Hope have been so convinced Thomas has gone off the deep end, maybe that’s where he’ll try to push Hope! The Bold and the Beautiful spoilers say some hot drama’s ahead, so don’t miss what’s in store. We’ll give you updates as other B&B news comes in. Stay tuned to the CBS soap and don’t forget to check CDL often for the latest Bold and the Beautiful spoilers, updates and news.