BY hellodrdavis on November 12, 2019 | Comments: one comment
Related : Soap Opera, Spoiler, Television, The Bold and the Beautiful 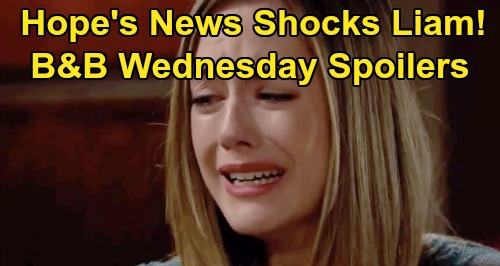 The Bold and the Beautiful spoilers for Wednesday, November 13, promise some major drama. We should note that CBS is currently planning to preempt Wednesday’s episode due to the impeachment hearings, but in the event the episode is aired, here is what you can expect. Brooke Forrester (Katherine Kelly Lang) will reel from what she’s just heard from Hope Logan (Annika Noelle). As B&B viewers know, Hope just confessed to Brooke that she killed Thomas Forrester (Matthew Atkinson) by shoving him into a vat of hydrofluoric acid.

Brooke will probably need a moment to process that big reveal, and then it seems that she’ll go into protective mama mode. B&B spoilers say that she’ll urge her daughter to keep what happened to Thomas a secret. It appears that she’ll tell her daughter that there’s no evidence that she committed any crime, and since no one else knows what happened, she has no reason to worry. Further, B&B spoilers indicate that he’ll tell Hope that she has no reason to feel guilty about what happened, so it looks like Brooke will blame Thomas for the whole thing.

But for Hope, the guilt is going to really start to sink in, and B&B spoilers say that she’ll feel absolutely awful about how she ended things with Thomas. She’ll probably replay the event over in her mind, figuring that if she had just done something differently, then maybe Thomas would still be alive. And things well get even more difficult for Hope when she must face Liam Spencer (Scott Clifton) and relay to him what happened that night.

It certainly doesn’t look like Hope will be honest with Liam about what happened with Thomas and the acid – in fact, it seems that she will keep that part of the story to herself, per Brooke’s instruction. But Liam will want to know how things went with Thomas and Douglas Forrester (Henry Joseph Samiri), and so Hope will share that Thomas signed off on the paperwork and that she is now legally Douglas’ mother.

The Bold and the Beautiful spoilers say that Liam will be absolutely stunned to hear that Hope managed to get Thomas to sign the adoption papers. Of course, B&B viewers know that Liam wasn’t thrilled about the prospect of taking on a third child, so he’ll probably need some time to process the reality of the situation, and he’ll likely have a lot of questions for Hope about how she was able to finagle the situation with Thomas.

But Hope won’t tell Liam about what really happened with Thomas. Chances are, she’ll tell him a partial truth about how she, Thomas, and Douglas had dinner together, then Thomas signed the papers, while leaving out the part about Thomas realizing that she had manipulated him and the rest of the tragic tale. It will be a big omission, and a big secret for Hope to keep from Liam.

B&B spoilers also say that Hope will learn something about Liam as well. Liam will share that he’s decided to return to Spencer Publications to work with his father Bill Spencer (Don Diamont). That will probably come as a surprise to Hope, and she may have some questions for Liam about it, but mostly she’ll be consumed by the terrible secret that she’s got on her mind.

One wonders how long Hope will be able to keep this secret between just herself and Brooke. The guilt will probably start to get to her after a while, but it looks like she’ll know that if she divulges what happened, then she could easily be on the line for attempted murder, which would mean that Douglas could lose both Thomas and herself. Chances are, she’ll think of Douglas and what’s best for him, which means keeping the terrible truth a secret.