BY Heather Hughes on November 18, 2019 | Comments: one comment
Related : Soap Opera, Spoiler, Television, The Bold and the Beautiful 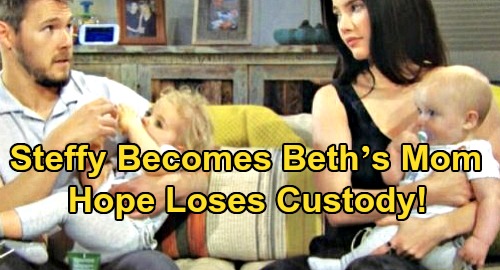 The Bold and the Beautiful (B&B) spoilers tease that Hope Logan (Annika Noelle) will face more regrets. She already regrets the situation that played out at Forrester Creations, which ended with Hope shoving Thomas Forrester (Matthew Atkinson) into a vat of doom. Hope’s terrified of the consequences she might face if the truth comes out – and she may have a good reason to worry.

Let’s consider the angles B&B’s been pushing. They’ve consistently focused on Hope’s obsession with Douglas Forrester (Henry Joseph Samiri) and how it’s not healthy in the eyes of several other characters. We’ve also seen Hope putting all her attention on Douglas instead of the baby she was so thrilled to get back.

The Bold and the Beautiful’s also been driving home this point about Thomas being unstable and dangerous. Hope and Brooke Forrester (Katherine Kelly Lang) have been adamant that it wasn’t safe for Douglas to be around him. When B&B is constantly repeating these themes, it means something. They could be giving us major clues about where this storyline’s headed.

Hope’s got a huge secret – and huge secrets have to come out on soaps! Of course, we know Thomas isn’t dead based on upcoming Bold and the Beautiful spoilers, but Hope currently thinks she killed him. Hope and Brooke’s cover-up may turn out to be brief, but it’s a cover-up conspiracy nonetheless. Between Hope’s reckless custody plot and how she handled it afterward, she could have a problem on her hands.

None of this is going to make Hope look like a responsible adult who should have custody of children. Thomas will resurface during the week of November 18-22, which will bring a shocker for Hope and a tense conversation. They’ll wind up telling Douglas Forrester (Henry Joseph Samiri) that Hope is officially his mother, but where will Hope and Thomas really stand? It’s tough to say what Thomas’ game is here.

Later, The Bold and the Beautiful spoilers say Hope will confess to Liam what happened at Forrester Creations. However, Hope will spend Thanksgiving with Liam and Beth, so her admission won’t spoil their holiday fun. It’s possible coming clean won’t truly mean coming clean! Hope could be in trouble if more details come out later and her side of the story’s questioned.

Regardless, Thomas isn’t just going to back off and let “Lope” live happily ever after. There has to be some other scheme brewing. Perhaps this will snowball into yet another out-of-control incident. Douglas could even get hurt if Thomas and Hope can’t get a grip on things.

At some point, Hope could lose custody of both Douglas and Beth. It’s easy to imagine Steffy petitioning to become Beth’s legal mother with Liam’s help. What a twist of fate that would be! Hope may find herself wishing she’d left all this alone and just concentrated on her own daughter.

Do you think Steffy will end up with custody of Beth? Will Hope become the unfit parent in Liam and Steffy’s eyes? The Bold and the Beautiful spoilers say some great drama’s ahead no matter what. We’ll give you updates as other B&B news comes in. Stay tuned to the CBS soap and don’t forget to check CDL often for the latest Bold and the Beautiful spoilers, updates and news.