The Bold and the Beautiful Spoilers: Hope & Brooke Lose Everything – Secrets and Lies Shatter Relationships, Liam and Ridge Move On

BY hellodrdavis on November 17, 2019 | Comments: 3 comments
Related : Soap Opera, Spoiler, Television, The Bold and the Beautiful 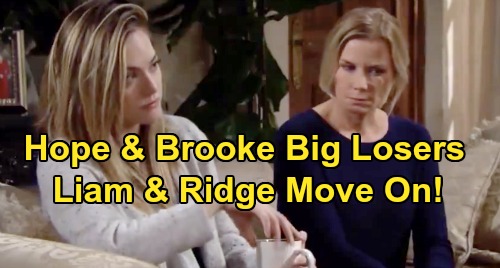 The Bold and the Beautiful (B&B) spoilers tease that Hope Logan (Annika Noelle) and Brooke Forrester (Katherine Kelly Lang) have a lot to lose right now. They’re currently involved in a coverup about what Hope thinks happened to Thomas Forrester (Matthew Atkinson). As B&B viewers know, Hope believes she killed Thomas by inadvertently pushing him into a vat, which seemingly contained hydrofluoric acid.

However, B&B spoilers indicate Thomas escaped from the vat unharmed, and he’s been off plotting his next move against the Logans. Thomas will remain seriously peeved that Hope manipulated him into signing the papers giving her parental rights to Douglas Forrester (Henry Joseph Samiri). He won’t be too happy about her shoving him into a vat of steaming liquid either!

Of course, Thomas has detested Brooke for some time now, so he’ll certainly resent her for wanting to just pretend his “death” never happened. We can’t forget Brooke nearly killed Thomas by pushing him off a cliff just weeks ago, so he’ll view this as the typical Logan pattern. Thomas may decide that since Hope and Brooke conspired to keep his presumed death a secret, he’s got a golden opportunity.

Thomas wants nothing more than to rid his family and Forrester Creations of the Logans for good. He’s been plotting to ruin Brooke’s relationship with Ridge Forrester (Thorsten Kaye) for a while now, and he should realize this could be a relationship-shattering blow. He’ll assume if Ridge learns Hope “killed” Thomas and Brooke tried to help her cover it up, “Bridge” may never recover.

The Bold and the Beautiful spoilers say Thomas will indeed push Brooke to tell Ridge the big secret. He’ll taunt her with what she’s been keeping from her own husband – a father who could’ve lost his son for all they knew. Then, there’s the issue of Hope keeping things from Liam Spencer (Scott Clifton). Liam didn’t want Hope to pursue Douglas custody in the first place, so he’s not going to like the mess that’s resulted.

How’s Liam going to feel when he eventually learns Hope thought she was responsible for Thomas’ demise and kept it a secret? He may be horrified that Hope could just let Thomas’ family think he had disappeared. It should come as a huge shock to Liam, who may view Hope in a devious new light.

The Bold and the Beautiful spoilers say Hope will come clean about what transpired at Forrester Creations. However, we also know “Lope” will still be enjoying themselves at Thanksgiving soon after. That either means Hope won’t quite tell the whole story yet or Liam will perhaps press pause on the drama. He may not want to ruin Beth Spencer (River Davidson and Madeline Valdez) and Douglas Forrester’s (Henry Joseph Samiri) holiday.

Regardless, Thomas won’t just step aside while “Lope” remains intact. He’ll undoubtedly find some way to destroy them, even if it takes another sneaky plan to make it happen. Liam and Hope’s relationship is bound to take more hits.

There’s another factor here that we should address. While Brooke and Hope have been busy with their deception, both Ridge and Liam have had someone else to turn to. Ridge has been spending time with Shauna Fulton (Denise Richards) while Liam has been pushed closer to Steffy Forrester (Jacqueline MacInnes Wood). This is a recipe for total relationship discord for both “Lope” and “Bridge.”

During an upcoming faceoff with Brooke, Ridge will make a heartbreaking declaration. He’ll argue that he can never look at Brooke the same way again and insist it’s over. Hope and Liam’s romance seems destined for a similar fate at some point. Bottom line, Brooke and Hope are poised to lose everything! We’ll give you updates as other B&B news comes in. Stay tuned to the CBS soap and don’t forget to check CDL often for the latest Bold and the Beautiful spoilers, updates, and news.