The Bold and the Beautiful Spoilers: Steffy Forrester’s Rage Spirals Out Of Control – Wants Revenge For Baby Swap 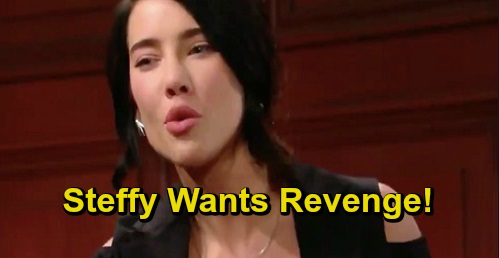 The Bold and the Beautiful spoilers reveal Steffy Forrester (Jacqueline MacInnes Wood) will continue to grieve the loss of Beth Spencer (River Davidson and Madeline Valdez). It was a child she adopted and took care of, whom she named Phoebe. We saw last week how Steffy unleashed her fury at Flo Fulton (Katrina Bowden). However, that probably won’t be the last of Steffy’s rage that we see.

Most of the scenes of Steffy Forrester show her angry about the entire situation. However, her rage might just be getting started. While Hope Logan (Annika Noelle) got baby Beth back, Steffy was forced to give up “Phoebe.” There is a lot of pain for all the parties involved. While it seems that Steffy is trying to remain steadfast and focused, there is only so much someone can take before they snap.

With any kind of loss, there is a process, or as some would say, “the stages of grief.” Steffy’s adopted daughter didn’t die, but that doesn’t make the loss any less painful. Unfortunately, there is no easy way for her to process this than to go through each stage. First, there was denial. Then, she let it sink in, but wanted to hold onto the baby. Afterward, she knew she had to give Hope her child and now, she has confronted Flo. However, losing a child is so much more complicated and has several layers of emotions.

There has been no mention of her talking to a counselor or therapist. Hope seems to have her entire family, plus Liam Cooper (Scott Clifton) and baby Beth. Steffy does have family, but it doesn’t seem like people are rallying around her and Kelly Spencer (Chloe Teperman and Zoe Pennington) in the same way. This must make Steffy and Kelly feel so alone.

B&B spoilers teased Steffy would confront Flo at the jail. This happened last week and Flo deserved every ounce of rage she received. However, Steffy kept mentioning what the secret did to Hope. Steffy is so busy focusing on the pain Hope went through that she seems to be bottling up her own loss.

Even though we have seen Steffy go into denial at first, then cry and now confront Flo, this isn’t over yet. Flo is out of jail and won’t face any charges due to the immunity deal. She is even staying in town, where Steffy will have to be reminded of what she did everytime she sees her.

Considering Steffy’s strong personality, there is a lot more rage pent up in her. One day, she is going to blow and who knows if Flo will survive the mother’s rage.

Stay tuned to B&B and don’t forget to check CDL often for the latest in The Bold and the Beautiful spoilers, updates and news.