The Bold and the Beautiful Spoilers: Steffy Reignites Feud with Hope – Liam Forced to Play Peacemaker

BY Heather Hughes on September 14, 2019 | Comments: one comment
Related : Soap Opera, Spoiler, Television, The Bold and the Beautiful 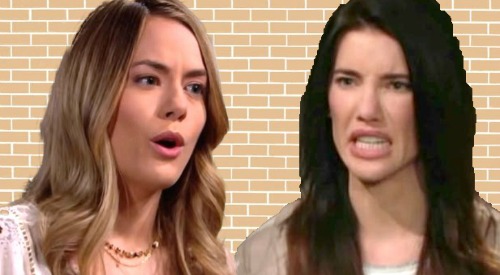 The Bold and the Beautiful (B&B) spoilers tease that the stress Steffy Forrester’s facing could take a toll. Steffy had to deal with the devastating blow of giving up “Phoebe Forrester” aka Beth Spencer (River Davidson and Madeline Valdez). She also had to accept that people in her life had lied to her – like her own brother, Thomas Forrester (Matthew Atkinson).

Of course, Florence “Flo” Fulton’s (Katrina Bowden) release isn’t going to help matters. Thomas is getting off scot-free as well, so nobody’s paying for much of anything except Dr. Reese Buckingham (Wayne Brady). It’s good that Reese is going down, but the other secret-keepers deserved more than lectures and slightly upended lives.

Even Ridge Forrester’s (Thorsten Kaye) night with Shauna Fulton (Denise Richards) could become a factor for Steffy. Their secret could lead to continue bonding and even a romance down the road. If Steffy finds out, she’s sure to feel betrayed. Ridge is already making Thomas the priority and was instrumental in making sure Flo got her immunity deal.

How’s Steffy supposed to feel when Ridge is letting Flo go free and potentially falling for her mother? Shauna lied about “Phoebe” as well, so there’ll be plenty of reasons for Steffy to be angry. However, losing her family will remain the biggest one. It’s undoubtedly been tough to adjust without having Liam Spencer (Scott Clifton) and Beth around all the time.

As Thomas pushes for Forrester Creations power and battles with “Lope” over Douglas Forrester (Henry Joseph Samiri), it could put Steffy in the prime position for anger. Will she take it out on Hope Logan (Annika Noelle)? The Bold and the Beautiful Hope will have to make some difficult decision regarding the Hope for the Future line. Steffy could force Hope to make those choices as she throws herself into work.

B&B fans can expect the “’Phoebe’ is Beth” issue to bubble up under the surface. The Bold and the Beautiful spoilers say there’ll be some conflict around FC, and it’ll partly stem from the baby switch. Although it isn’t Hope’s fault or even Liam’s for that matter, no one would blame Steffy for being a little resentful.

Hope may be understanding at first, but she has her limits. The Bold and the Beautiful spoilers say Hope and Steffy’s feud could easily be reignited. Doesn’t it always come back around at some point? Liam just might find himself playing peacemaker as a new war erupts!