The Bold and the Beautiful Spoilers: Thomas and Flo Find Love – Suffering Schemers Drawn Together After Brutal Rejections? 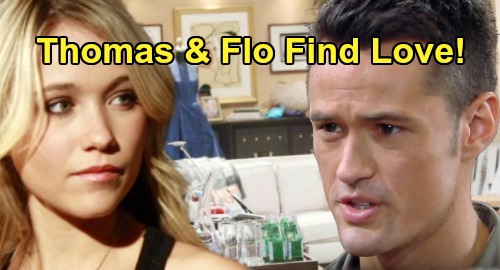 The Bold and the Beautiful (B&B) spoilers tease that the CBS soap has a bit of a dilemma. B&B fans know Thomas Forrester (Matthew Atkinson) has done some pretty terrible things, but he’s sticking around. The show could’ve sent Thomas off to prison for his crimes or even had him go completely off the rails and head to a mental institution. They even could’ve gone with a brain tumor defense and suggested that Thomas couldn’t control his behavior.

However, The Bold and the Beautiful ignored those options and intentionally made Thomas have to work for redemption. He’s certainly got a long road ahead of him to achieve that – IF he even truly wants to. By going this route with Thomas, viewers will be left wondering about Thomas’ motives and mental stability in the months to come.

None of this makes Thomas a very viable love interest, which is a problem. As much as they enjoy parading Thomas around shirtless, he’s still going to need one. Who’s going to want Thomas? He can’t be trusted at all, and Hope Logan (Annika Noelle) wants nothing to do with him. Perhaps another lonely heart could end up drawn to Thomas despite her issues with him.

Florence “Flo” Fulton (Katrina Bowden) finds herself in a similar predicament at the moment. She’s got a long redemption road ahead of her, too. Thomas wants Hope, but he can’t have her. Likewise, Flo wants Wyatt Spencer (Darin Brooks) and may not be able to have him either. There’s a chance Wyatt will forgive her in time, but he’s not ready to take that step yet.

The Bold and the Beautiful spoilers suggest Wyatt will make a daring gesture for Sally Spectra’s (Courtney Hope) sake as he works to win her over. He’ll seemingly put Flo in the rearview mirror for a while, so where does that leave her? In the same boat as Thomas. She needs a love interest, but she has limited options because everyone on canvas is so against her.

This could be an opportunity to put these two peas in a pod together. Flo is firmly against Thomas right now, but that doesn’t rule them out as a pairing. Just look at what’s happening between Shauna Fulton (Denise Richards) and Ridge Forrester (Thorsten Kaye). It’d be interesting to see Thomas end up in a similar situation. Like father, like son. Ridge and Thomas may be falling for the Fulton women soon!