The Bold and the Beautiful Spoilers: Steffy Gets Revenge After Losing Phoebe – Guilty Baby Stealers and Liars Pay for Her Pain 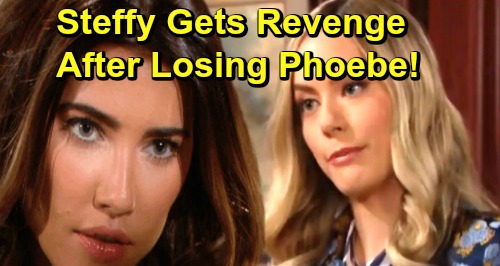 The Bold and the Beautiful (B&B) spoilers tease that Steffy Forrester (Jacqueline MacInnes Wood) will face an excruciating ordeal. She’ll have to hand over “Phoebe Forrester” (River Davidson and Madeline Valdez) – the illegally adopted daughter she adores. Steffy couldn’t love “Phoebe” more if she was her own flesh and blood. She’s bonded with “Phoebe” and will be crushed when it’s time to give her up.

The truth about Beth Spencer will certainly bring some difficulties for Steffy. Hope Logan (Annika Noelle) is sure to lash out at the people who hid the secret, but The Bold and the Beautiful spoilers say Steffy won’t spare them either. She’ll have plenty of anger for the characters who set this in motion or kept quiet later.

Reese Buckingham (Wayne Brady) set Steffy up for devastation by exploiting Taylor Hayes’ (Hunter Tylo) trust in him. Florence “Flo” Fulton (Katrina Bowden) went along with the cruel scheme, so she’ll definitely face backlash. The same goes for Zoe Buckingham (Kiara Barnes) and Xander Avant (Adain Bradley) – at least they will if they’re both still alive at that point!

Of course, Thomas Forrester (Matthew Atkinson) will also face his sister’s fury. Steffy will be appalled with Thomas for making such dirty moves – all while knowing “Phoebe” was Beth. It’s doubtful she’ll buy Thomas’ claims that he wanted to protect her family. B&B fans know Thomas is mainly about himself and what he wants, so this was really about protecting his own chance at a family with Hope.

Steffy and Hope may clash in the aftermath of the big reveal, but they can unite on one thing. Reese and Flo’s plot was truly horrible. Like Hope, Steffy may want revenge for what they cost her. Flo and Reese forced Hope to miss precious time with her baby girl. Her marriage fell apart thanks to them. Steffy’s also set to miss a lifetime with the child she loved, so she’ll have every reason to retaliate.