BY Heather Hughes on July 9, 2019 | Comments: one comment
Related : Soap Opera, Spoiler, Television, The Bold and the Beautiful 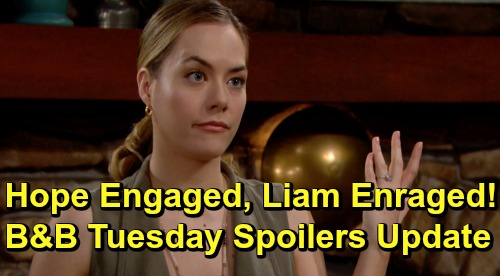 The Bold and the Beautiful (B&B) spoilers update for Tuesday, July 9, tease that Xander Avant (Adain Bradley) will remain fully convinced of Thomas Forrester’s (Matthew Atkinson) guilt. He’ll fill Zoe Buckingham (Kiara Barnes) in on the GPS info he found and insist Thomas killed Emma Barber (Nia Sioux). Xander will urge Zoe to believe that Thomas is a murderer and that’s all there is to it.

However, B&B spoilers say Zoe won’t jump to conclusions as quickly as Xander. She’ll point out that they don’t know what Thomas did at the crash site. It’s not like the GPS can tell them exactly what happened, so Zoe won’t think Xander should rush right to murder.

Of course, Xander may argue that Thomas has given them every reason to assume the worst. He’s done nothing that deserves the benefit of the doubt in Xander’s book. The truth is Thomas did play a role in running Emma off the road. This situation may not be as nefarious as Xander thinks, but Thomas is clearly the villain in this story. It’ll be downright appalling to Xander when Zoe defends Thomas.

Other Bold and the Beautiful spoilers say Liam Spencer (Scott Clifton) will face a bombshell. As Thomas and Hope Logan’s (Annika Noelle) engagement news spreads, Liam will be in total shock. Once he wraps his head around Hope’s decision, Liam will fly into a rage. He’ll be disgusted with Thomas for making his move so fast and preying on Hope in a weak moment.

As you might expect, Liam will be on a fierce mission. He’ll do everything in his power to shut down these wedding plans. Liam will feel like Hope’s making a huge mistake, so he’ll resolve to help her see the light as soon as possible. He won’t want Hope making someone as shady as Thomas her husband.

The Bold and the Beautiful spoilers say Liam will spar with Steffy Forrester (Jacqueline MacInnes Wood) on the matter soon. She may feel like Liam should back off and let Hope make her own choices, but Liam will refuse to back down. It won’t be long until Liam confronts Hope and professes his deep love to stop the madness.

Unfortunately, Liam’s attempt to halt the nuptials won’t work out as well as he hopes! We’ll give you updates as other B&B details emerge. Stay tuned to the CBS soap and don’t forget to check CDL often for the latest Bold and the Beautiful spoilers, updates and news.