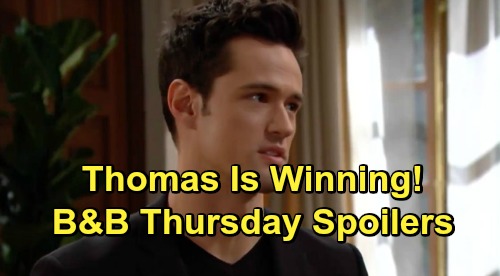 The Bold and the Beautiful spoilers for Thursday, June 6, tease that Brooke Forrester (Katherine Kelly Lang) will get some heartbreaking news. She has been incredulous about Hope Spencer’s (Annika Noelle) decision to end her marriage to Liam Spencer (Scott Clifton). Brooke only wants what’s best for her daughter, and she truly believes that the best thing for everyone is for Hope and Liam to remain married and work through their grief together.

But Hope has been insistent that her marriage must end, and that it’s for the best. She’s just thinking about the children, and she envisions a utopia for Kelly Spencer (Chloe Teperman and Zoe Pennington) and Phoebe Forrester (River Davidson and Madeline Valdez), with Liam by their sides forever. She just doesn’t see any other way.

But according to B&B spoilers, Brooke still won’t feel at peace with her daughter’s decision. On Thursday’s episode, she’ll talk with Hope and beg her to reconsider ending her marriage. As B&B viewers know, Hope has already had annulment papers sent to Liam, so the process is well underway. All that’s left is for the papers to be signed, and the marriage will be done.

Brooke will reel from the news that Hope has already had the papers drawn up, and she’ll get the feeling that Hope is rushing things. Something just won’t feel right to Brooke, and she’ll just want Hope to slow the process down and think this decision over a bit more carefully. But it looks like her pleas will fall on deaf ears, as Hope will be determined to go forward with the annulment.

Meanwhile, on the new episode of B&B on Thursday, June 6, Liam will face off again with Thomas Forrester (Matthew Atkinson). Exactly what brings the two men together remains to be seen, but it will likely involve a situation in which Thomas butts in with his opinion about Lope’s marriage. Thomas always seems to be right there with a biting comment or reminder about where Liam’s loyalties should lie.

Look for Liam to call out Thomas on his manipulations once again. The Bold and the Beautiful spoilers say that he’ll lay Thomas’ motivations – namely, to get Hope for himself – on the line. But will smug Thomas be at all affected by Liam’s words? It’s doubtful, since Thomas only seems to be emboldened by opposition. He may come out of his argument with Liam even more determined to win Hope for himself!