The Bold and the Beautiful Spoilers: Steffy Rehires Zoe – Hope Freaks, Blasts Rival For Her Betrayal

BY hellodrdavis on December 16, 2019 | Comments: one comment
Related : Soap Opera, Spoiler, Television, The Bold and the Beautiful 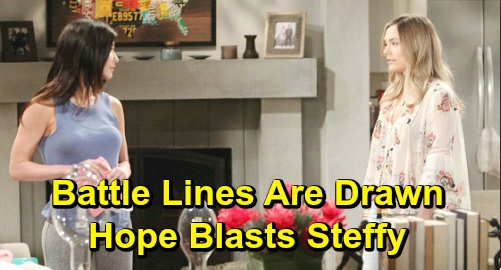 The Bold and the Beautiful (B&B) spoilers tease that Steffy Forrester (Jacqueline MacInnes Wood) will make a bold move. As B&B viewers know, she’s just been propositioned by Liam Spencer (Scott Clifton) to work with him to expose Thomas Forrester (Matthew Atkinson). Liam is sure that Thomas is still secretly chasing after Hope Logan (Annika Noelle), although Thomas insists that he’s now reformed and is no longer interested in Hope romantically.

Well, it appears that Steffy will agree to work with Liam, since she’d like to know the truth about what Thomas is up to as well. And that will lead the two of them on a mission to uncover the truth, and it looks like they’ll first seek out Thomas’ friend Vinny Walker (Joe LoCicero). And in looking for Vinny, they’ll encounter Zoe Buckingham (Kiara Barnes), whom B&B viewers know is currently staying at Vinny’s apartment.

And when faced by Steffy and Liam, B&B spoilers say that Zoe will fall on her sword, expressing her deep remorse for her part in the Beth Spencer (River Davidson and Madeline Valdez) situation. Steffy and Liam will probably still be feeling angry about the whole thing, but it seems that they’ll realize that they’re better off forgiving Zoe and using her to their advantage.

B&B spoilers say that Zoe will wind up spilling all the tea on Thomas, so it looks like she’ll fill Steffy and Liam in on how Thomas is still hung up on Hope and that his endgame is to be with her and take over Forrester Creations. Of course, that should particularly interest Steffy, since she’s currently Co-CEO of Forrester – she might realize that Thomas is gunning for her job eventually.

At any rate, it looks like Steffy will decide to take action, and she’ll decide to one-up Thomas and give Zoe her job back. B&B viewers will remember that Thomas has been promising Zoe her job back once he’s back in good at Forrester, but Steffy will beat him to it and bring Zoe back and, she hopes, gain Zoe’s loyalty in the process. It looks like Steffy and Liam will then ask Zoe to work with them and against Thomas.

It will be a good plan, but there will be someone who’s not happy about the situation, and that’s Hope. According to B&B spoilers, she’ll freak out once she finds out that Zoe is back at Forrester Creations. After all, Zoe is the daughter of the person who completely destroyed Hope’s life and led her to believe that Beth had died. Hope will never forget what Reese Buckingham (Wayne Brady) did to her and her family, nor how Zoe helped him keep the terrible secret.

The Bold and the Beautiful spoilers say that Hope will be furious with Steffy’s decision, and she’ll let Steffy have it. It looks like we’re in for another Hope/Steffy feud as the two women argue over Zoe’s rehiring. Hope’s just not in the mindset of forgiveness yet when it comes to the Beth situation, so it will be hard for her to understand Steffy’s rationale for wanting Zoe around. Of course, she probably won’t be privy to Steffy and Liam’s plan to use Zoe to find out what Thomas is up to, so she just won’t understand what Steffy could be thinking.

At any rate, it looks like we will see some major fireworks between Hope and Steffy on the issue of Zoe’s rehiring. But ultimately, Steffy is Co-CEO and can make these kinds of decisions without input from Hope…but the whole thing will probably still infuriate Hope to no end.

Do you think that Steffy and Liam are on the right track enlisting Zoe in their plan to expose Thomas? Stay tuned to B&B and don’t forget to check CDL often for the latest Bold and the Beautiful spoilers, updates, and news.