BY Heather Hughes on May 11, 2019 | Comments: Leave Comments
Related : Soap Opera, Spoiler, Television, The Bold and the Beautiful 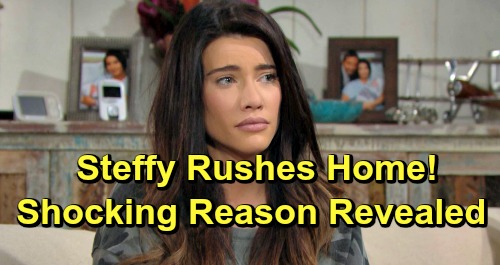 The Bold and the Beautiful (B&B) spoilers tease that Steffy Forrester (Jacqueline MacInnes Wood) will head back to the CBS soap starting May 23. Whether we first see her in Paris or in Los Angeles, what will ultimately bring her home? There are some good options to consider here.

The first is a simple one. Steffy could simply miss her loved ones and decide it’s time to make a comeback at Forrester Creations, too. She may determine that her plan to give Liam Spencer (Scott Clifton) and Hope Spencer (Annika Noelle) space to heal is pointless if her brother’s going to sabotage them. The news about Thomas Forrester’s (Matthew Atkinson) actions should leave Steffy fuming.

All of that could serve as an easy setup for Steffy’s reentrance to the canvas. However, there’s a chance B&B will go in another direction. They might take a more dramatic route by having something bigger happen that needs Steffy’s attention.

For example, there could be some snag in the adoption paperwork like there once was for Lizzie Forrester. That led birth mom Nicole Avant (Reign Edwards) to want her baby back before she was ultimately talked out of it. Will an issue arise with “Phoebe Forrester’s” (Isabella de Armas and Rosalind Aune) adoption as well?

Florence “Flo” Fulton (Katrina Bowden) obviously won’t want “Phoebe” since she’s not the real birth mother anyway, but Brooke Forrester (Katherine Kelly Lang) might use this to cause problems. It could be something Steffy needs to come home and handle. The Bold and the Beautiful spoilers say this could certainly make Flo nervous and set up more drama on her end.

Then again, Liam might be the one who asks Steffy to move back to LA – perhaps for Hope’s sake. It’s clear that she feels guilty about keeping Liam away from Steffy and the girls. She’d certainly feel less guilty if Steffy, “Phoebe” and Kelly Spencer (Zoe Pennington and Chloe Teperman) were just across town instead of across the world. This could be desperate Liam’s attempt to save his struggling marriage.

Steffy could have a similar thought process when it comes to the girls being near Liam. She’s really the one keeping them apart, not Hope. That’s not Steffy’s fault since her absence is mainly about Jacqueline MacInnes Wood’s maternity leave, but it’s still a realization Steffy could come to.