The Bold and the Beautiful Spoilers: Steffy’s Bitter Revenge – Flo Can’t Escape Her Worst Nightmare, Must Pay for ‘Phoebe’ Pain

BY Heather Hughes on September 11, 2019 | Comments: one comment
Related : Soap Opera, Spoiler, Television, The Bold and the Beautiful 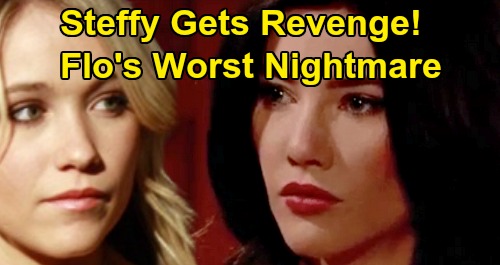 The Bold and the Beautiful (B&B) spoilers tease that Florence “Flo” Fulton’s (Katrina Bowden) immunity deal won’t go over well with her victims. Of course, Steffy Forrester (Jacqueline MacInnes Wood) will be especially incensed. When she realizes Flo won’t pay at all, Steffy’s wrath is sure to reignite.

To make matters worse, Flo will be pursuing Wyatt Spencer (Darin Brooks) again and trying to stir up trouble with Sally Spectra (Courtney Hope). Give it a rest, Flo! Hasn’t she done enough damage?

Nevertheless, Flo will have every intention of doing more if Wyatt will take her back. She’ll be eager to get their romance back on track, but Sally won’t give Wyatt up without a fight.

Steffy should be appalled that Flo’s fighting for her dreams. She may scoff over Flo trying to recapture what she lost. Flo would like to build a future with Wyatt, but what about Steffy’s future as a mom to “Phoebe Forrester” aka Beth Spencer (River Davidson and Madeline Valdez)? That was ripped away, and no amount of fighting for it will ever bring it back. She never should’ve been put in that position.

Steffy’s bound to think all of this is extremely unfair. Flo helped bring a stolen baby into Steffy’s life and allowed her to bond with this child. Steffy’s family has now been torn apart and that’s on Flo. Dr. Reese Buckingham (Wayne Brady) couldn’t have pulled off his plan without Flo’s help.

The Bold and the Beautiful spoilers say we’ll see Steffy regain her strength and power in the weeks ahead. She’ll undoubtedly be a bit bitter and jaded. Steffy would have to be after everything Flo put her through. Will she resolve to make Flo suffer? Will Steffy take revenge into her own hands?

Steffy Forrester Rises From The Ashes – Will She Get Her Payback?

We’re not saying Steffy will come unhinged and do anything to harm Flo. However, she could easily set Flo up for a fall or two. There are surely a few ways Steffy could make Flo pay. She could at least make it so unpleasant for Flo in LA that she considers going back to Vegas.

Steffy may urge Wyatt to steer clear of Flo, too. She might remind him that Flo is bad news and encourage Wyatt not to twist the knife by getting mixed up with her again. B&B fans know Steffy doesn’t need any more betrayals. Ridge’s refusal to stand in the way of the immunity deal is bad enough.

The Bold and the Beautiful spoilers say Steffy will rise from the ashes this fall, so payback on Flo may be part of that. Flo won’t be rotting behind bars, but Steffy could still make it her mission to make Flo miserable! We’ll give you updates as other B&B details emerge. Stay tuned to the CBS soap and don’t forget to check CDL often for the latest Bold and the Beautiful spoilers, updates and news.