The Bold and the Beautiful Spoilers: Steffy’s Dating Again – Liam Stunned To Learn About New Man

BY hellodrdavis on October 27, 2019 | Comments: 3 comments
Related : Soap Opera, Spoiler, Television, The Bold and the Beautiful 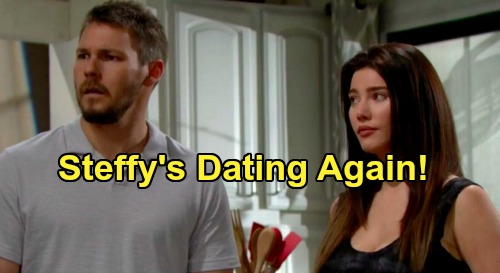 The Bold and the Beautiful spoilers tease that Liam Spencer (Scott Clifton) is in for a huge surprise. As B&B viewers know, he and Steffy Forrester (Jacqueline MacInnes Wood) have recently reconnected in a very important way. For a good while, Liam was wholly focused on Hope Logan (Annika Noelle) and his daughter Beth Spencer (River Davidson and Madeline Valdez) and didn’t appear to see much of Steffy or Kelly Spencer (Chloe Teperman and Zoe Pennington). But now Liam seems to be making an effort to spend more time with Kelly, and that of course puts him directly into Steffy’s orbit.

Liam even brought Beth to visit Steffy, since he knows how much Steffy misses the little girl that she used to think was her own. And according to B&B spoilers, Liam and Steffy will soon spend Halloween evening together with the girls, while Hope is off trying to cajole Thomas Forrester (Matthew Atkinson) into allowing her to adopt Douglas Forrester (Henry Joseph Samiri). It seems that Liam and Steffy will renew their bond as parents and come away from the evening immensely thankful for what they’ve got.

But soon, Liam is going to get a shocker. According to B&B spoilers, he’ll learn that Steffy is getting back on the dating scene again. Exactly who Steffy is going to be dating and how that all comes about remains to be seen, but this is news that is going to excite the droves of Steffy fans out there who have been clamoring for Steffy to get a new man. Ever since Steffy was asked out by Leo (Sam Myerson) last year, fans have been looking forward to the day when Steffy moves on.

Well, it appears that the day is soon approaching, and that something is going to happen that puts Steffy back in action and dating again. It looks like she’s not going to sit around and wonder what Liam’s going to do with his life and whether he’s going to “choose” her. And that’s apparently going to leave Liam stunned.The Bold and the Beautiful spoilers say that he’ll be shocked to learn that Steffy is dating again.

But Liam’s just going to have to get used to the idea – surely he doesn’t expect Steffy to wait around on him to waffle his way back to her, or to just not get out there and have a life of her own. Now that she’s gone through her period of grieving over Phoebe/Beth and she’s back to work, it’s time for her to be “Independent Steffy” again and get on with her life. And that should mean going out and having fun with someone new, who isn’t a Spencer.

So, does all of this mean that we’ll see a new, handsome man on the scene soon? Scores of Steffy fans out there hope so, and assuming that Liam is planning a life with Hope, then there’s no reason he should balk at Steffy looking for someone to share her time with. The big question now is who will Steffy be dating? We can’t wait to find out!

Are you looking forward to seeing Steffy dating someone new? Stay tuned to the CBS soap and don’t forget to check CDL often for the latest Bold and the Beautiful spoilers, updates, and news.