The Bold and the Beautiful Spoilers: Steffy’s Future Revealed – What You Need To Know About B&B Character’s New Path

BY Heather Hughes on October 5, 2019 | Comments: one comment
Related : Soap Opera, Spoiler, Television, The Bold and the Beautiful 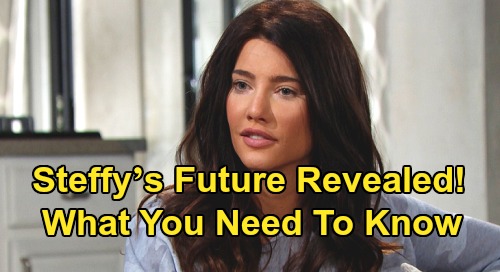 The Bold and the Beautiful (B&B) spoilers reveal that Steffy Forrester (Jacqueline MacInnes Wood) will make a triumphant comeback. B&B fans haven’t seen much of Steffy lately, but she’ll be popping up more soon.

With that in mind, let’s look at what we know about Steffy’s future. Some big story developments are headed Steffy’s way, so we should go over those and consider what they mean for the character.

For starters, Steffy will have some exciting plans at Forrester Creations. Some fall fashions will make quite a splash, and Steffy will play a role in bringing them to the public.

A Hot Forrester Fashion Show Is Brewing For Fall 2019

The Bold and the Beautiful spoilers say a hot fashion show is brewing, so there’ll be a lot of prep work to do. Steffy will certainly delegate most of that, especially since she’ll find other things to keep her busy around FC.

Thomas Forrester’s (Matthew Atkinson) mission to bring down the Logans should be a problem for Steffy. She may catch on and lash out at her brother eventually. Steffy’s a smart gal – smart enough to know she should keep an eye on Thomas! As Thomas’ craving for power grows, he’ll have his eye on more control at Forrester. Steffy won’t give Thomas that without a fight, so that’ll bring some great fall drama.

Of course, Steffy won’t be able to avoid a little drama with Hope Logan (Annika Noelle) and Liam Spencer (Scott Clifton) as well. B&B fans can expect some interesting issues to be explored with this trio.

Steffy will be moving on following her “Phoebe Forrester” aka Beth Spencer (River Davidson and Madeline Valdez) heartbreak, but the pain will linger. It could subconsciously drive the conflict between Hope and Steffy, but Liam will be there to play peacemaker if things get too heated.

Unfortunately, love doesn’t seem to be on the horizon for Steffy just yet. She’ll be focusing on herself, which may be a good thing since she’s still healing. Even so, it’s a bummer for viewers who want to see Steffy happy with a new man. On the bright side, B&B might deliver on that in the new year. It’s something we can hopefully look forward to once Steffy finds her footing again.

The Bold and the Beautiful spoilers say Steffy will become a force to be reckoned with in the coming months. The future’s bright, even if some viewers don’t see Steffy as often as they’d like. We’ll give you updates as other B&B news comes in. Stay tuned to the CBS soap and don’t forget to check CDL often for the latest Bold and the Beautiful spoilers, updates and news.