BY hellodrdavis on October 5, 2019 | Comments: one comment
Related : Soap Opera, Spoiler, Television, The Bold and the Beautiful 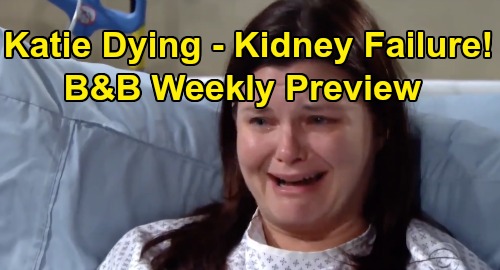 The Bold and the Beautiful (B&B) spoilers preview teases that the situation will be looking bleak for Katie Logan (Heather Tom). She’s currently hospitalized with kidney failure, and the new B&B promo video for the week of October 7-11 is all about the urgency of her situation. From the beginning, she’s known that the sooner she gets a donor kidney, the better, but this week the situation will become dangerously urgent.

Katie’s kidney specialist, Dr. Davis (Tisha Campbell), is shown in the promo telling Katie that she needs a kidney transplant as soon as possible, and from the way Katie and Bill Spencer (Don Diamont) are reacting to the news, the situation must be grave. We have to remember that Katie is a heart transplant patient, and so this isn’t a typical kidney failure situation. Katie’s entire system is compromised, and she’s not as strong as a typical patient.

Could it be that Katie simply can’t be on dialysis for the long-term? Or perhaps her kidneys are so damaged that dialysis won’t sustain her. Katie’s kidney damage came from years of anti-rejection medication for her heart, so the damage to her kidneys may be extensive. Whatever the case, it looks like Dr. Davis’ news won’t be good, and she might actually give Katie an indication of just how long she can expect to live in the event a donor kidney doesn’t become available.

In the promo, Katie tearfully says that Dr. Davis has already reached out to everyone, and that no one was the right match, and later she cries that she doesn’t want to leave Bill and Will Spencer (Finnegan George). It looks like B&B viewers are in for some sad moments as Katie contemplates the terrible likelihood that she could die before a suitable kidney is found for her.

Bill is also shown in the promo absolutely horrified by this turn of events. “My son is not losing his mother, and I’m not losing my Katie,” he states, but he looks really scared, as do Brooke Forrester (Katherine Kelly Lang) and Donna Logan (Jennifer Gareis), who are there by Katie’s side as well. Bill laments that “there has to be someone who can save her,” but since time is of the essence, that person needs to come forward fast.

Fortunately, ongoing The Bold and the Beautiful spoilers say that by week’s end, a living donor will indeed be found, but that person will choose to remain anonymous. Katie will consider the person to be her secret guardian angel, but neither she nor anyone else will know that it is her niece, Flo Fulton (Katrina Bowden) who is her donor. According to B&B spoilers, Flo will want to remain anonymous, as she won’t want to be seen as attempting to get back in the family’s good graces.

However, it seems that Katie will insist on finding out the identity of her donor, and ultimately she’ll have to come to grips with the fact that Flo stepped forward and gave her the gift of life, which should make for some gripping drama down the road. But for now, Katie will enjoy knowing that she’s going to be ok, and her family will be grateful for her miracle.

It looks like we’re in for an exciting week, so stay tuned! We’ll give you updates as B&B news comes in. Stick with the CBS soap and don’t forget to check CDL often for the latest Bold and the Beautiful spoilers, updates, and news.