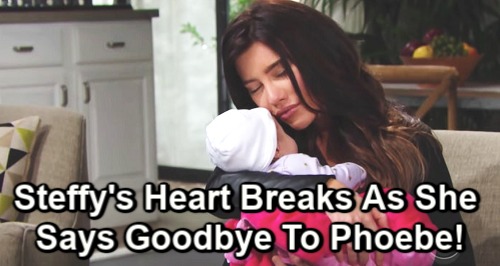 The Bold and the Beautiful (B&B) spoilers tease that Steffy Forrester (Jacqueline MacInnes Wood) will face a major blow. The countdown is on to the big Beth Spencer reveal, which will leave both Steffy and Hope Logan (Annika Noelle) stunned. You can bet Hope and Steffy will cycle through plenty of emotions as they process this crazy news.

Hope will certainly be angry with those who robbed her of her daughter. Reese Buckingham (Wayne Brady), Florence “Flo” Fulton (Katrina Bowden), Thomas Forrester (Matthew Atkinson) and all the other secret-keepers will face her intense wrath. However, the big reveal will also bring joy for Hope. It’ll give her a sense of peace she hasn’t had since that night on Catalina Island.

Steffy will have that same anger toward those who set her up for heartache, but there’ll be no joy behind it. There’ll be only emptiness and despair. Steffy couldn’t love “Phoebe Forrester” (River Davidson and Madeline Valdez) more if she’d given birth to herself.

She’s been the only mother this child has ever known. Steffy thought she’d be the one raising “Phoebe,” so this is going be crushing.

Of course, the hardest part just might be saying goodbye. Hope’s going to want her baby back ASAP since she’s missed so much time with her already.

She’ll plan to take her daughter home immediately and start living the life they were meant to live. Will Hope be able to curb her anger and let Steffy have a chance at a “Phoebe” farewell?

It isn’t Steffy’s fault she got scammed by ruthless Reese and fibbing Flo. If Hope loses sight of that in the heat of the moment, Liam Spencer (Scott Clifton) should be there to remind her. The Bold and the Beautiful wouldn’t miss out on a heartbreaking B&B scene where Steffy cuddles this little girl one last time.

Hope will surely let Steffy see Beth after this, but it won’t be the same. Steffy will have to let go of the title of mother when it comes to this baby. Steffy will thankfully still have Kelly Spencer (Zoe Pennington), but she’ll feel like half her heart is walking out that door. It’ll be devastating to watch poor Steffy cry as she hands Beth over.