The Bold and the Beautiful Spoilers: Steffy’s Nightmare Gets Worse, Liam’s Love Only Cure – Jealous Hope Watches Him Slip Away

BY Heather Hughes on August 26, 2019 | Comments: one comment
Related : Soap Opera, Spoiler, Television, The Bold and the Beautiful 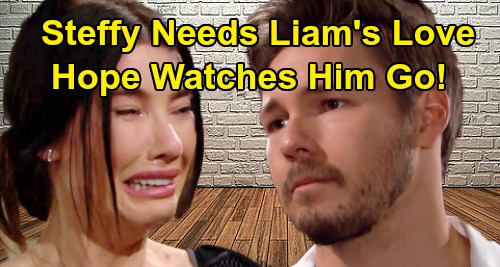 The Bold and the Beautiful (B&B) spoilers tease Steffy Forrester’s (Jacqueline MacInnes Wood) nightmare is only going to get worse. She’s already been through the excruciating ordeal of handing over Beth Spencer (River Davidson and Madeline Valdez), the precious little girl she believed she’d raise as her own. Steffy’s still suffering with that blow, but plenty more are on the way.

Thomas Forrester’s (Matthew Atkinson) tough ordeal will undoubtedly take a toll on Steffy. We may not see that onscreen right now, but she’ll be going through a lot. Steffy loves her brother despite his mistakes, so it’ll be hard for her think about losing him.

Even after Thomas ultimately wakes up and begins his recovery, Steffy will still find herself facing crisis after crisis. She’ll worry about Ridge Forrester (Thorsten Kaye) and Brooke Forrester’s (Katherine Kelly Lang) marriage, which is on the verge of crumbling thanks to Thomas’ fall. Steffy will be stressed over seeing her dad in so much pain, so it’ll just add to her list of concerns.

The Bold and the Beautiful spoilers say the cops will also make a crucial connection. Thomas will be linked to Emma Barber’s (Nia Sioux) death, so he could be looking at charges and jail time. It’ll be hard for Ridge to accept that, so Steffy will have to fret about her dad and her brother all over again. The Forrester family will really be put through the wringer in the coming weeks.

Of course, Steffy will have to deal with Liam Spencer (Scott Clifton) and Hope Logan’s (Annika Noelle) growing bond. She no doubt would’ve fully reunited with Liam if the truth about Beth hadn’t come out. Steffy’s dreams were about to come true, but they were all crushed instead. When you tack on the chaotic drama that followed and is still to come, Steffy’s going to be a real mess.

With all this in mind, Steffy will surely need a shoulder to cry on. Liam will always have a bond with Steffy through Kelly Spencer (Zoe Pennington), and she should spend time with Beth eventually, too. It’ll break Liam’s heart to see Steffy having such a hard time. Since we all know how Liam loves his damsels, he may not be able to resist helping Steffy rise out of this funk.

It’s easy to imagine Hope growing jealous at some point. Liam may insist Steffy could have a breakdown if someone doesn’t step up for her. Since Ridge will already have so much on his plate, he won’t be able to support Steffy like he should. Liam may feel like Steffy will have no one if he doesn’t take care of her.

B&B fans know Liam and Hope’s happiness can’t last forever. Will it be Liam who destroys it? Will he let himself fall for Steffy as he comforts her? The Bold and the Beautiful spoilers say some romantic twists and turns are brewing, so stay tuned. We’ll give you updates as other B&B news comes in. Stick with the CBS soap and don’t forget to check CDL often for the latest Bold and the Beautiful spoilers, updates and news.