The Bold and the Beautiful Spoilers: Team Thomas or Team Liam – Who Should Win B&B’s Brewing Battle? 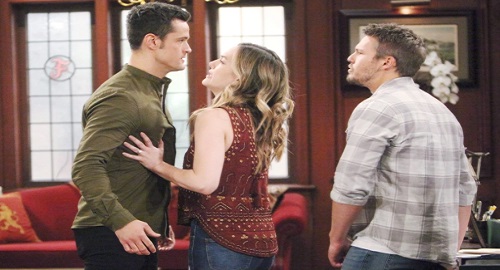 The Bold and the Beautiful (B&B) spoilers tease that a fierce battle is brewing on the CBS soap. Thomas Forrester (Matthew Atkinson) has his sights set on Hope Logan (Annika Noelle) and has no intention of backing down. He’ll determine that he needs to try another tactic to win Hope over, but Liam won’t be fooled by the reformed act.

Thomas will clearly be plotting another maneuver to win Hope for himself, so Liam will take action. He’ll come up with his own plan to use Thomas’ twisted nature against him, but it won’t be easy. Steffy Forrester (Jacqueline MacInnes Wood) and Zoe Buckingham (Kiara Barnes) will assist Liam, but Thomas will have Douglas Forrester (Henry Joseph Samiri) in his corner. He’ll keep using the kid since Douglas can really tug at Hope’s heartstrings.

Of course, this is an interesting feud since Thomas is clearly obsessed and out of control at times. Even so, Thomas is charming and fun to watch. He’s been a real bright spot this year and consistently makes B&B entertaining. Love him or hate him, Thomas is an intriguing character. Despite some of his terrible behavior, many fans like Thomas and find themselves rooting for him.

On the other hand, Liam is right that Thomas can’t be trusted. He’s also right to be suspicious of what Thomas is cooking up next. Liam will know Thomas is just pretending to let go of Hope and shift his life in a different direction. He’ll sense that Thomas could still be a serious threat – and Steffy may ultimately agree based on the evidence.

With all that in mind, which side are you on? Are you “Team Thomas” or “Team Liam”? There’s no right or wrong answer. It’s OK to root for Thomas, even if he’s sort of the villain based on how B&B’s presenting him. Liam’s always the white knight swooping in to save the damsel in distress. Some people are tired of that soap trope, so maybe you want Thomas to outwit the rescue ranger!

Then again, you might be hoping Liam exposes Thomas’ shady activities once and for all. Perhaps that could lead to Thomas getting genuine help and being a more viable love interest. The Bold and the Beautiful spoilers say more danger may be brewing thanks to Thomas, so maybe Liam should be the victor in your eyes.