The Bold and the Beautiful Spoilers: Thomas Gets The Upper Hand Using Blackmail – Hope Tied To Him Forever Through Douglas 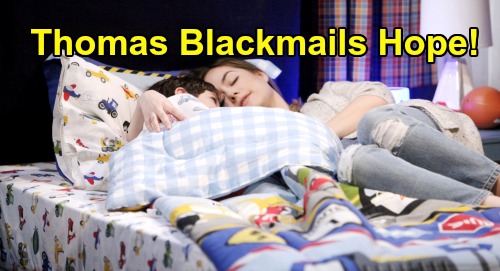 The Bold and the Beautiful (B&B) spoilers tease that Hope Logan (Annika Noelle) will be in for a big surprise. As B&B viewers know, she had a big plan going when it came to Thomas Forrester (Matthew Atkinson). She had planned to use his feelings for her to manipulate him into signing adoption papers giving her joint custody of Douglas Forrester (Henry Joseph Samiri). Turns out, she got what she wanted, but things from there didn’t go as planned.

Thomas ended up falling over a railing after Hope pushed him aside, and he fell right into an open vat of hydrofluoric acid…or at least that’s what Hope was led to believe later. According to B&B spoilers, Thomas will have survived the ordeal, and he’ll be off plotting against Hope while she’s devastated over “killing” him. And eventually, he’ll come back to an astonished Hope.

Not only will Thomas be back, but he’ll now have leverage over Hope that he can use to blackmail her. He’ll know that she not only pushed him into the “acid,” which could of course be construed in a very sinister way, but that she also covered up his supposed demise. Thomas will know that she and Brooke Forrester (Katherine Kelly Lang) didn’t come forward with the truth, and this will be pure gold for Thomas.

Of course, armed with that information, Thomas could easily portray Hope as someone who fraudulently manipulated him into signing over rights to Douglas, then deliberately tried to kill him and keep the whole thing quiet. It seems that any plan on Hope’s part to get joint custody of Douglas, then seek full custody by arguing that Thomas is an unfit father, will have totally fizzled.

After all, if Hope tries to prove that Thomas is unfit, he could throw her actions right back at her and make her look like the unfit parent. And so it would seem that Thomas totally has the upper hand now, and that he is going to get his wish…to be tied to Hope forever through Douglas. Now, Hope obviously won’t be with Thomas romantically, but she won’t be able to get rid of him now.

According to B&B spoilers, Brooke is going to be completely rattled by this development, as she realizes that Thomas has manipulated Hope once again. And now Hope and Liam Spencer (Scott Clifton) will be plagued by Thomas in their lives as they help to raise Douglas together. One wonders just how happy about all of this Liam will be, given that he wasn’t keen on caring for a third child along with his two daughters.

At any rate, it seems that Thomas will once again have control when it comes to Hope, and Hope and Brooke will really have no one to blame but themselves. After all, they could have come clean about Thomas’ fall into the vat from the get-go, but now Hope will be tied to blackmailing Thomas forever…which seems to be exactly what he wants.

Do you think that Hope and Thomas will be able to co-parent Douglas effectively, given what’s happened between them? Stay tuned to B&B and don’t forget to check CDL often for the latest Bold and the Beautiful spoilers, updates, and news.