The Bold and the Beautiful Spoilers: Thomas Kidnaps Hope – Determined to Steal Her from Liam, Repair Destroyed Marriage?

BY Heather Hughes on August 9, 2019 | Comments: one comment
Related : Soap Opera, Spoiler, Television, The Bold and the Beautiful 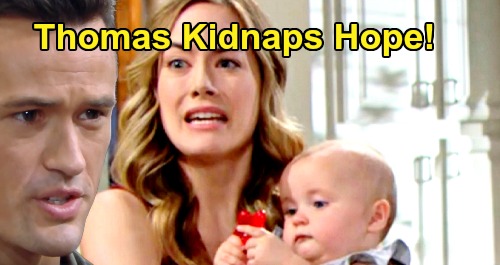 The Bold and the Beautiful (B&B) spoilers tease that Thomas Forrester (Matthew Atkinson) will remain a dark threat. He’s completely obsessed with his new wife, Hope Forrester (Annika Noelle), and that’s not going to change just because he’s on the run.

B&B fans will see Thomas at his hideout with Vincent Walker (Joe LoCicero) during the week of August 12-16. He’ll mull over his marriage disaster and how he might fix it.

Of course, that’s just wishful thinking on Thomas’ part. There’s no way he can undo the damage, especially since Hope never loved him to begin with. She only married Thomas because of Douglas Forrester (Henry Joseph Samiri) and all Thomas’ manipulation. Everything changed once Hope found out Beth Spencer (River Davidson and Madeline Valdez) was alive and Thomas had been lying about it.

H0pe Forrester’s Heart Belongs To Liam Spencer And Always Will

However, Thomas is clearly off his rocker here. He’s not thinking straight and that’ll lead him to do some dangerous things. The more Thomas thinks about Hope, the more he’ll want her back – although he never truly had her. Hope’s heart still belongs to Liam Spencer (Scott Clifton), and she’ll tell him so on new B&B episodes in the week ahead.

Thomas won’t be privy to that, but it wouldn’t matter anyway. He’ll convince himself he still has a chance at happiness with Hope, so he’ll put a desperate plan in motion.

The Bold and the Beautiful spoilers say Thomas will have a disturbing realization. During the week of August 19-23, Thomas will determine there’s only one way to repair his marriage and pry Hope out of Liam’s grasp.

Does Thomas Forrester Have Deadly Intentions For Liam Spencer?

Naturally, kidnapping Hope seems like the first step. Thomas may realize Hope would never be happy without Beth, so he may swipe the baby, too. Perhaps Thomas will have deadly intentions for Liam later, but taking Hope out of the picture and away from his naysayers is crucial. It looks like Thomas will have to do that before he does anything else.

After all, Thomas wouldn’t want Hope around to witness what he has in store for Liam! The Bold and the Beautiful spoilers say some hot drama’s coming up, so don’t miss it.

We’ll give you updates as other B&B news emerges. Stay tuned to the CBS soap and don’t forget to check CDL often for the latest Bold and the Beautiful spoilers, updates and news.