BY Heather Hughes on May 25, 2019 | Comments: Leave Comments
Related : Soap Opera, Spoiler, Television, The Bold and the Beautiful 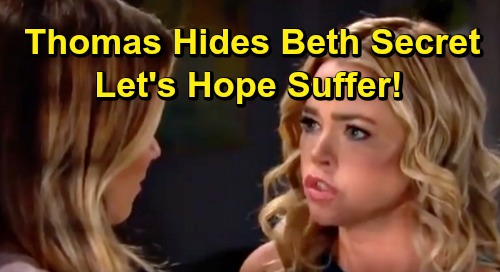 The Bold and the Beautiful (B&B) spoilers tease that the drama surrounding “Phoebe Forrester” (Madeline Valdez) will heat up. So far, the circle of people who know the truth about Beth Spencer is pretty small. It started out as Dr. Reese Buckingham’s (Wayne Brady) scheme, which Florence “Flo” Fulton (Katrina Bowden) was eventually brought in on.

That led to Zoe Buckingham (Kiara Barnes) getting involved before Shauna Fulton (Denise Richards) became the latest keeper of the Beth secret. Reese is lucky enough to be avoiding all the chaos out of town, but the women he left behind will hope the secret doesn’t spread. They’ll do their best to keep a lid on things, but that lid’s about to pop right off!

It looks like Xander Avant (Adain Bradley) will be next to learn the horrible baby swap shocker, but the leak won’t stop there. Thomas Forrester (Matthew Atkinson) will also find himself with knowledge he wishes he didn’t have. The Bold and the Beautiful spoilers say Thomas will feel like he’s on the verge of getting everything he wants, but a piece of information will threaten to burst his bubble.

B&B fans can see where this is going. Hope Spencer (Annika Noelle) will need a little time to heal before she jumps into a relationship with Thomas, but we all know he’ll be relentless. Despite Hope’s attempts to push Thomas away, he’ll just manage to pull her closer. Thomas will ultimately convince Hope that they can have the perfect family together. It’ll be her second chance after losing Beth.

That’s undoubtedly the info that’ll fall into Thomas’ hands. He’ll have to decide what he’s going to do with it. Thomas would be Hope’s hero if he exposed the truth, but it wouldn’t be enough to keep his shot with her. He’ll know it would only push Hope and Liam back together.

Thomas should keep quiet for selfish reasons, but he might convince himself he’s doing this for Steffy Forrester (Jacqueline MacInnes Wood). She would suffer a great loss of her own if the truth came out. Thomas may make himself believe he’s simply protecting his sister and creating an “everybody wins” scenario.

Plus, we know the baby switch secret won’t be revealed to Hope for quite some time. All that adds up to Thomas keeping his mouth shut and building the suspense before the big reveal. The Bold and the Beautiful spoilers say interesting twists and turns are brewing, so stay tuned.

How do you feel about Thomas joining the secret club? Will you find it despicable if Thomas plans to take the Beth bomb to his grave? We’ll give you updates as other B&B news comes in. Stick with the CBS soap and don’t forget to check CDL often for the latest Bold and the Beautiful spoilers, updates, and news.