The Bold and the Beautiful Spoilers: Thomas Pressures Shauna To Go After Ridge – Ensures Brooke’s Heartbreak and ‘Bridge’ Breakup 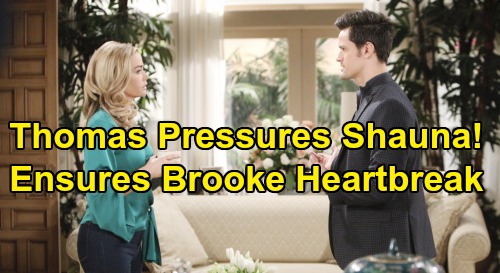 The Bold and the Beautiful (B&B) spoilers tease that Thomas Forrester (Matthew Atkinson) will get some great news. As B&B viewers know, he’s been angling for months to break up Ridge Forrester (Thorsten Kaye) and Brooke Forrester (Katherine Kelly Lang). Thomas is tired of Brooke’s influence over his father, and he wants her out of his family and out of the family business as well.

Of course, Thomas has done his share of scheming to help make that happen, including the time when he made sure that Brooke found out about Ridge’s night at Bikini Bar with Shauna Fulton (Denise Richards). That’s something that Ridge doesn’t know about, but it was instrumental in starting the beginning of the end for “Bridge.”

Thomas really couldn’t have played the whole thing any better, as his latest manipulation – staying away for 24 hours after Hope Logan (Annika Noelle) thought that she had pushed him into a vat of hydrofluoric acid – ended up being the last straw for Ridge, since Brooke didn’t tell Ridge when she thought that Thomas was dead. Now Brooke and Ridge are about to sign divorce papers, as B&B spoilers say that the two won’t be able to reach an agreement on how to save their marriage.

And that’s going to leave Thomas exuberant. According to B&B spoilers, he’ll be absolutely thrilled when he hears from Ridge that he and Brooke signed the papers and simply couldn’t work out their differences. Of course, he’ll have to hide his glee from his dad, but inwardly he’ll be doing backflips.

But that won’t be enough for Thomas. He’ll want to ensure that Ridge and Brooke don’t have second thoughts later and call off the divorce. He’ll probably be pretty sensitive to the fact that Ridge will be devastated and perhaps willing to take drastic measures to save his marriage. So, Thomas will seek out a little insurance, to make sure that Ridge moves on with his life and doesn’t want to look back to Brooke.

According to The Bold and the Beautiful spoilers, Thomas will seek out Shauna once again. As B&B viewers will remember, Thomas previously approached Shauna and asked her to romantically pursue Ridge in order to get him away from Brooke. Shauna flatly refused Thomas at the time, since Ridge was (supposedly) happily married and Shauna didn’t want to break up a marriage, or work with Thomas for that matter.

But now things are a bit different. Brooke and Ridge will have signed the divorce papers, and Ridge will be a free man. Plus, Shauna has now realized that she loves Ridge and would like nothing more than a relationship with him. She’s probably going to pursue Ridge anyway, so when Thomas asks her to go after Ridge, it will be something she’ll probably already be planning on doing.

Still, Shauna probably won’t want to be associated with Thomas, so she may make it crystal clear to him that she’s not going to pursue Ridge for him, and that if it happens, it will happen naturally. Nevertheless, that should be music to Thomas’ ears, as he’ll surely get the picture that Shauna wants to be with Ridge. It will be a win for Thomas.

One wonders is Thomas will then let the matter drop, or whether he’ll take additional action to ensure that Brooke remains out of Ridge’s life. Do you expect to see Thomas do some more scheming to rid his family of Brooke for good? Stay tuned to B&B and don’t forget to check CDL often for the latest Bold and the Beautiful spoilers, updates, and news.