BY Heather Hughes on November 19, 2019 | Comments: one comment
Related : Soap Opera, Spoiler, Television, The Bold and the Beautiful 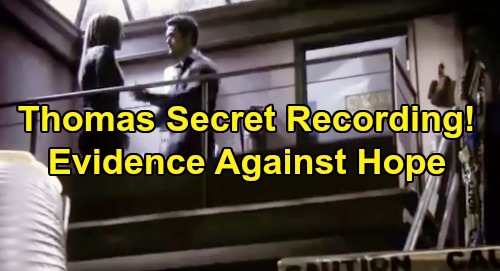 The Bold and the Beautiful (B&B) spoilers tease that Thomas Forrester (Matthew Atkinson) may have been prepared that fateful night at Forrester Creations. B&B fans know Thomas and Hope Logan (Annika Noelle) had a major confrontation, which sent Thomas hurling off the catwalk and into a deadly acid vat – or so Hope thinks. The truth is Thomas isn’t dead and will soon make a surprise comeback.

Thomas was undoubtedly suspicious of Hope as she sought custody of Douglas Forrester (Henry Joseph Samiri). How could he not be? Thomas surely knew to be wary of Hope’s kindness, even if he desperately wanted things to work out. With that in mind, it’s reasonable Thomas recorded their whole showdown that night. He may have wanted evidence of the stunt Hope was trying to pull.

Thomas is certainly someone who always has a few tricks up his sleeve. It makes sense for Thomas to have protected himself after everything that had already gone down. Thomas and Hope had no reason to trust each other. Perhaps Thomas made a recording as an insurance policy and captured crucial evidence against Hope on it.

If so, Thomas could do some serious damage with that evidence. He could blackmail Hope with it and threaten to have her locked up for attempted murder. Thomas could point out that even if Hope beats the charges, she could lose custody of Douglas and Beth Spencer (River Davidson and Madeline Valdez). Thomas would have major leverage to hold over Hope and make her do whatever he wants.

This might even be a surprise twist that B&B reveals later. Thomas may save this potential recording for when he really needs it. If he sees that Hope isn’t going to cooperate the way he’d like, Thomas could whip it out and give her a shock. He could suggest he hates that it’s come to this, but Hope’s left him no choice.

The Bold and the Beautiful spoilers say Thomas will definitely continue scheming in the coming weeks. Will he use a recording of that night as part of his plot? Thomas could force Hope to dump Liam Spencer (Scott Clifton) at some point. Anything is possible if he’s got undeniable proof against Hope.