The Bold and the Beautiful Spoilers: Thomas Sabotages Liam and Hope’s Marriage After Emotional Plea For Douglas

BY Heather Hughes on October 19, 2019 | Comments: one comment
Related : Soap Opera, Spoiler, Television, The Bold and the Beautiful 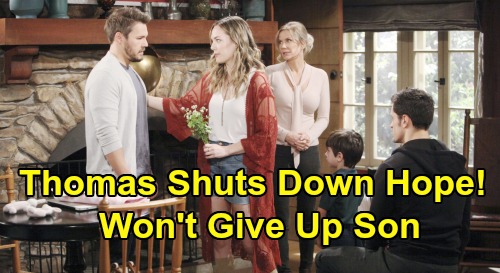 The Bold and the Beautiful (B&B) spoilers tease that Thomas Forrester (Matthew Atkinson) will hear an emotional plea. B&B fans know there have been some strong opinions about what’s best for Douglas Forrester (Henry Joseph Samiri).

Thomas showed some remorse before his cliff fall, but he ultimately fell right back into his abusive pattern. During their latest chat, Thomas once again blamed Douglas for defying him and revealing the truth about Beth Spencer (River Davidson and Madeline Valdez).

It’s clear that Thomas hasn’t really changed – and he may have no intention of doing so. Regardless, Hope will remain concerned about Douglas’ well-being. The week of October 21-25 will bring Hope’s passionate speech.

Will Conversation Turn Into A Heated Confrontation Instead?

The Bold and the Beautiful spoilers say Hope will try having a heart-to-heart with Thomas. She’ll push Thomas to understand he can’t be the father Douglas needs right now.

Despite Thomas’ protests, Hope will insist Douglas needs love and stability. She’d feel much better about Douglas spending time in the “Lope” home and in the care of other loved ones. Hope will feel like Thomas has a lot of work to do before he can be a real dad again. He hasn’t been a very good one, so he needs to accept that and focus on making the necessary changes.

Unfortunately, this heart-to-heart could turn into a heated confrontation. Since Thomas has such a Logan grudge right now, he probably won’t respond well to Hope’s pitch. Thomas may just end up lashing out at Hope for causing more pain. He’ll probably feel like Hope wants Liam Spencer (Scott Clifton) to serve as Douglas’ father instead of him.

This could easily backfire on Hope. It might make Thomas even more determined to serve as the only parental figure in Douglas’ life. He could take steps to cut Liam and Hope out of the picture sooner or later. Douglas brings “Lope” joy, which certainly isn’t something Thomas wants them to have.

The Bold and the Beautiful spoilers say Thomas could cause more marriage drama for Liam and Hope down the road. Since Steffy Forrester (Jacqueline MacInnes Wood) will already be creating issues, the last thing they need is another source of conflict!