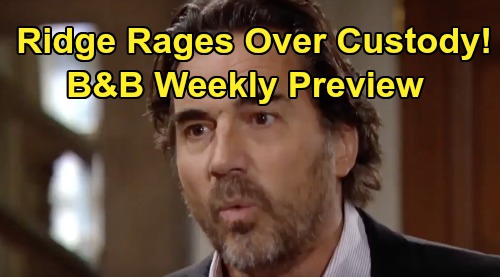 The Bold and the Beautiful (B&B) spoilers preview for the week of October 21-25 tease that the battle over Douglas Forrester (Henry Joseph Samiri) will heat up. B&B fans know the Logans insist they want what’s best for him. Brooke Forrester (Katherine Kelly Lang) will think it’s time to have a permanent plan in place, and Hope Logan (Annika Noelle) will agree. They’ll try to make Douglas’ well-being the priority.

Hope talk it over with Liam Spencer (Scott Clifton) and push him to stand with her on this. She’ll believe they should welcome Douglas into their home for good and be the parents he deserves. Afterward, Thomas will become privy to Hope and Brooke’s plans. He’ll realize they’re plotting to take Douglas away from him, so he’ll immediately march over to confront them.

The Bold and the Beautiful spoilers say Hope will plead with Thomas in the week ahead. She’ll beg Thomas to sign the papers and let her be a mother to Douglas. Hope will think she can be a stable, supportive influence on the boy. She won’t feel like Thomas can be the dad Douglas needs, but he’ll be appalled by all this. Thomas will suggest they’ve got some nerve asking him to give up his son.

Ridge Forrester (Thorsten Kaye) will eventually join this confrontation, which will definitely get heated. He’ll be just as disgusted as Thomas is when he realizes this was some sort of sneak attack. Ridge will accuse Brooke of orchestrating the ambush, but she’ll rant about how dangerous Thomas is. She’ll still feel like Thomas could snap at any moment, so she won’t think Douglas is safe in his care.

Ridge won’t think Douglas is at risk, so he’ll stick up for Thomas and put his foot down. Brooke, Hope and Liam will all have a chance to weigh in, but Ridge will think this is utterly ridiculous. He’ll shout that you can’t just steal a kid. Furthermore, Ridge won’t allow Thomas to be threatened. He’ll lay down the law with Brooke and hope his words sink in.

The Bold and the Beautiful’s weekly promo shows Ridge yelling, “No one’s taking Douglas away! NO ONE!” Which side are you on in the Douglas war? Things are about to get vicious, so don’t miss all the action. We’ll give you updates as other B&B news comes in. Stay tuned to the CBS soap and don’t forget to check CDL often for the latest Bold and the Beautiful spoilers, updates and news.