BY hellodrdavis on October 18, 2019 | Comments: one comment
Related : Soap Opera, Spoiler, Television, The Bold and the Beautiful 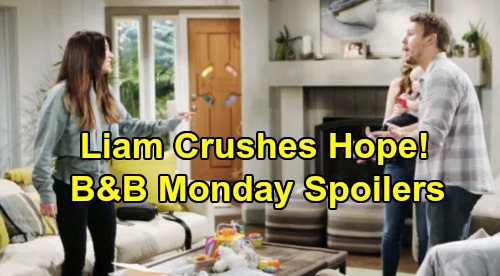 The Bold and the Beautiful spoilers for Monday, October 21, tease that the argument between Steffy Forrester (Jacqueline MacInnes Wood) and Hope Logan (Annika Noelle) will take a major turn. As B&B viewers know, Hope marched right into Steffy’s house, upset about the text that she saw on Liam Spencer’s (Scott Clifton) phone. In the text, Steffy thanked Liam for bringing Beth Spencer (River Davidson and Madeline Valdez) for a visit and included “XOXO” at the end of the message, which really set Hope off.

Then Liam happened upon the scene and started defending Steffy against Hope’s tirade. That led Hope to demand that Liam clear things up by telling Steffy that his future is with her, and not Steffy. Liam was dumbfounded and looked like he didn’t know what to do. Well, on Monday’s episode, Liam will finally speak, but it looks like Hope won’t like what she hears.

B&B viewers probably noticed that Steffy looked pretty sure of herself when she was questioning Hope earlier about whether she was sure that Liam was really all hers. Of course, this is all happening after viewers didn’t see the resolution to Thursday’s cliffhanger, when Steffy asked Liam if there was the possibility of a future between the two of them. So exactly what Liam is going to say now remains to be seen.

But it looks like Hope’s going to be pretty stunned with what she ends up hearing from both Liam and Steffy in the moments to come. According to The Bold and the Beautiful spoilers, Steffy will end up taking the upper hand in the argument from Hope. So what could end up happening here? Ongoing B&B spoilers indicate that Hope and Liam will later push forward with their plans to take care of Douglas Forrester (Henry Joseph Samiri), so it doesn’t look like they’re going to be breaking up.

Perhaps Liam will let Hope know that he still has deep feelings for Steffy, perhaps even that he still loves her. That would certainly stun and rattle Hope for the moment, and would even give Steffy the upper hand for a little while. Liam might even declare that he and Hope haven’t officially committed to each other in the way that Hope thinks they have. That would probably sufficiently unnerve Hope.

Meanwhile, on the new episode of B&B on Monday, October 21, Thomas Forrester (Matthew Atkinson) will continue his anti-Logan tirade with Zoe Buckingham (Kiara Barnes). As B&B viewers know, Thomas and Zoe have just reconnected and Thomas has been filling Zoe in on his plans for the future. Thomas wants nothing more than for the Forresters to be rid of the Logans for good, and he’s developing plans to do just that.

According to B&B spoilers, Thomas will make a big revelation to Zoe about how she fits into his plans for the future at Forrester Creations. Thomas believes that he’s the future of Forrester, and he’s been designing a lot lately and working toward his goal of eventually designing at the fashion house again. And given that he’s no longer with Hope and designing with her in mind, he’ll need a new muse.

It looks like Thomas will let Zoe know that she has been the inspiration for many of his designs. As B&B fans will remember, Zoe used to be a model for Forrester Creations before she was fired for her role in keeping Beth’s existence a secret. Thomas might have a plan in mind to eventually bring Zoe back to Forrester Creations once he gets back in himself.

In fact, Thomas might let Zoe know that if she’s loyal to him and supports his efforts to eradicate the Logans, then he’ll see to it that she gets her old modeling gig back. We’ll see what Thomas ultimately reveals to Zoe, but we have a feeling that Zoe’s not yet done at Forrester Creations, and that Thomas may be her ticket back in.