BY Marcy Cohen on June 23, 2019 | Comments: one comment
Related : Soap Opera, Spoiler, Television, The Bold and the Beautiful 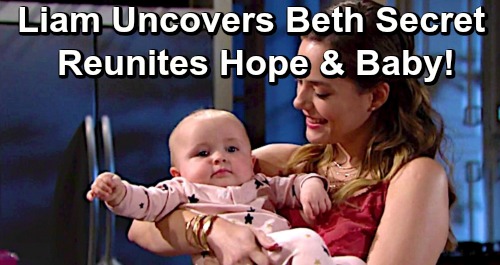 The Bold and the Beautiful (B&B) spoilers tease that Liam Spencer (Scott Clifton) may slip back into a familiar role. B&B fans know the baby swap storyline is really heating up now. We’ve got Hope Logan (Annika Noelle) as the main victim – our damsel in distress. We’ve also got Thomas Forrester (Matthew Atkinson) as our villain, who’s tightening his grip and growing darker every day.

What we don’t have yet is our hero, but that’ll change down the road. Will Liam once again be the rescue ranger? He tends to love saving the day, particularly when it involves a woman he’s attracted to, has a history with or both. Hope checks all the boxes and has a connection to Liam that’ll remain crucial. They’re Beth Spencer’s parents, so the big reveal will affect them both.

Let’s consider how this might play out. The Bold and the Beautiful spoilers say Thomas will keep manipulating Hope and slowly start to win her over. Meanwhile, Liam will remain wary of Thomas. He doesn’t trust the guy, so he’ll feel obligated to watch out for his vulnerable former flame – at least for a while.

Things could shift once Liam and Steffy Forrester (Jacqueline MacInnes Wood) reunite romantically, but Liam’s feelings for Hope won’t go away completely. He’s always going to care about her, so he’ll inevitably intervene if red flags are raised. Will Liam face an intriguing clue or two? Could he begin to suspect that Thomas has a secret and set out to uncover it?

There are some key elements that B&B still hasn’t addressed. Liam and Hope were given a deceased baby girl, who they believed was Beth. They couldn’t help but notice everything about her – including the birthmark on her left leg. It’s possible The Bold and the Beautiful has dropped that part of the story, but there’s a chance they’re saving is as a vital piece of the puzzle.

For example, Liam might overhear Thomas mention something about Catalina Island – such as no one can ever find out what happened there. That might lead Liam to dig into who else was at the clinic that night. His research could lead him to the real birth mom. A simple conversation about that birthmark could click things into place. Liam might realize that they were handed the wrong baby!

That doesn’t mean Liam would immediately realize Steffy had the right one, but he’d be well on his way. Will Liam ultimately be the hero who reunites Hope with their child? Will he save Hope from evil Thomas by exposing the truth?