The Bold and the Beautiful Spoilers: Thomas Scores A Victory – Moves Douglas Into Forrester Mansion 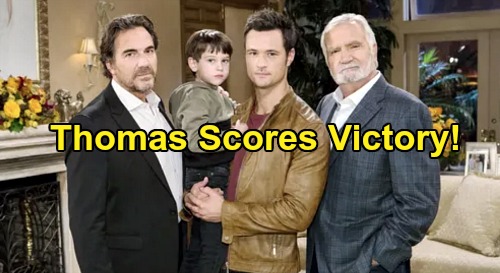 The Bold and the Beautiful spoilers tease that Thomas Forrester (Matthew Atkinson) will soon be in a race against time. As B&B viewers know, he’s been separated from his son Douglas Forrester (Henry Joseph Samiri) for a while now. Ever since the big reveal about “Phoebe Forrester” being Beth Spencer (River Davidson and Madeline Valdez), Thomas has been living out of the Forrester mansion and at his friend Vinny Walker’s (Joe LoCicero) apartment, and thus away from Douglas. That has seemed to suit Thomas just fine, since sadly he has been irked at his son for telling the secret about Beth.

But soon, something is going to happen that will strike fear in Thomas. According to B&B spoilers, he’ll find out that there’s a plot in place to usurp custody of Douglas from him. Brooke Forrester (Katherine Kelly Lang) has been pretty vocal about her desire to keep Douglas away from Thomas on a permanent basis, since she doesn’t trust Thomas and doesn’t think he’s fit to be a father right now.

Of course, Hope Logan (Annika Noelle) is in full agreement with Brooke on this matter. And according to B&B spoilers, she’ll soon urge Liam Spencer (Scott Clifton) to join with her to raise Douglas permanently. She’ll even make a big pitch to Thomas stating all the reasons why she thinks he should allow her and Liam to raise Douglas in their home. Of course, by the time this happens, Thomas will be fully aware that there’s a conspiracy against him to take his son, and he’s apparently going to have none of it.

Thomas will be outraged to learn that Hope and Brooke think they can just take his son from him. Of course, Thomas already thinks that Brooke has an overblown sense of entitlement when it comes to all things Forrester. He doesn’t like it that Brooke thinks she can run Ridge Forrester’s (Thorsten Kaye) life and Forrester Creations. He’s stated on numerous occasions that “a Logan” shouldn’t be making decisions in the Forrester family and business.

But if Thomas was angry with Brooke before, he’ll be even more peeved when he learns that she’s spearheaded the effort to get Douglas from him. And he won’t be the only one. According to B&B spoilers, Ridge will also be dismayed to find out that Hope and Brooke want to get Douglas away from Thomas. And that will lead to a big move.

The Bold and the Beautiful spoilers say that Ridge, Thomas, and Douglas will move into the Forrester mansion with Eric Forrester (John McCook) and Quinn Forrester (Rena Sofer). Ridge, who has been living in Steffy Forrester’s (Jacqueline MacInnes Wood) home, will apparently decide that it’s time to take control of the situation and get some proximity to both Thomas and Douglas. Plus, he’ll probably want to make it clear to Brooke and Hope that Douglas’ place is with the Forresters, not them.

So it seems that Thomas will score a victory for the time being and he’ll not only get his son back with him, but he’ll gain some support in numbers. This should set up an interesting (not to mention contentious) dynamic between the Forresters and the Logans. The coming custody battle for Douglas, if there is one, will probably come down to a major family dispute.

Do you think that Thomas could actually lose custody of Douglas? Stay tuned to the CBS soap and don’t forget to check CDL often for the latest Bold and the Beautiful spoilers, updates, and news.