BY Kinsley Goldman on June 9, 2019 | Comments: one comment
Related : Soap Opera, Spoiler, Television, The Bold and the Beautiful 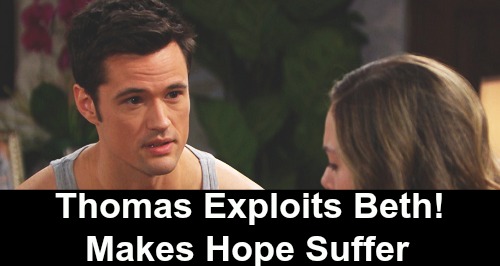 The Bold and the Beautiful (B&B) spoilers tease that Thomas Forrester (Matthew Atkinson) will quickly work through his emotions after a shocking discovery. He’ll be in disbelief when he first learns Beth Spencer is still alive. However, a grilling session with Florence “Flo” Fulton (Katrina Bowden) will convince Thomas it’s true.

Thomas will then move to shock, disgust and eventually anger. His instinct will likely be to tell Hope Spencer (Annika Noelle) the truth, but Thomas will manage to calm down and think this through. He’ll feel a bit guilty about keeping Hope in the dark on her child’s survival, but he’ll shove down any remorse and move forward with his plan.

In fact, it looks like Thomas may use the secret to his advantage. The Bold and the Beautiful spoilers say Thomas will manipulate Hope on new B&B episodes during the week of June 17-21.

Once he’s armed with this new Beth information, Thomas can use it to keep Flo in line. She’ll have no choice but to be his ally, so will he use Hope’s cousin as part of his scheme?

There’s a chance Flo could be forced to take part in the manipulation. She might have to praise Thomas’ good qualities and push Hope in his direction. Even if Thomas continues to manipulate all on his own, the fact that he knows about Beth will change things.

If Thomas brings up anything related to Hope’s baby at all, it’ll be downright sick. He’ll be adding to Hope’s pain unnecessarily.

Regardless, B&B fans can expect Thomas to pull Hope closer after the annulment. He’ll exploit her vulnerability and set the stage for something special. The Bold and the Beautiful spoilers say Thomas will pull some sneaky maneuvers just before he shows off a new design. He’ll probably suggest he designed it just for Hope and ask if she approves.

Hope will probably love whatever Thomas comes up with. She’ll appreciate the distraction as she tries to move on after losing Liam Spencer (Scott Clifton). Hope won’t realize Thomas has the power to take away all her pain! He’ll just choose to put himself first and let Hope suffer.