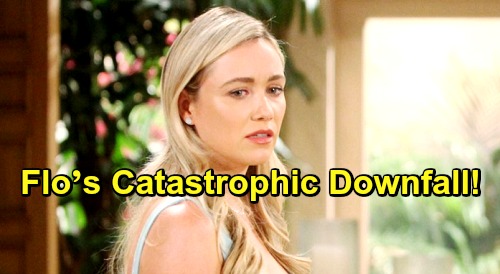 The Bold and the Beautiful (B&B) spoilers tease that Florence “Flo” Fulton (Katrina Bowden) will manage to keep her wonderful new life intact. It won’t be easy now that Xander Avant (Adain Bradley) knows the truth about Beth Spencer. He realizes Zoe Buckingham (Kiara Barnes) hid the truth along with Flo, so he’s breathing down their necks to come clean.

Flo will gain another problem when Thomas Forrester (Matthew Atkinson) learns Beth is alive. She’ll feel overwhelmed all over again as this secret becomes bigger and ultimately, darker. The Bold and the Beautiful spoilers say a shocking death will raise the stakes this summer, so Flo will be at the end of her rope.

Even so, Flo’s new family and revived love story with Wyatt Spencer (Darin Brooks) will prove too much to give up. There’s not much drama if Flo just confesses. Hope Spencer (Annika Noelle) will likely find out another way, which will make things even worse for Flo.

Other than the guilt that haunts her daily, Flo’s life is looking pretty good at the moment. All that would change with three little words: Beth is alive. The Bold and the Beautiful spoilers state that Flo’s downfall will be swift and catastrophic. All her fears could come true once it’s time for her day of reckoning.

B&B has seemingly tried to make viewers have sympathy for Flo, but is it working? Is there any excuse good enough to warrant keeping a grieving mom from her daughter? Flo’s reasons are selfish, so it’s tough to care if she crashes and burns. In fact, many fans will enjoy watching Flo get what’s coming to her.

The Bold and the Beautiful spoilers say Flo’s status as a Logan will be in jeopardy. The family may disown her over this. Flo’s bond with Hope will certainly be obliterated. Wyatt Spencer (Darin Brooks), who considers Flo a beacon of honesty, will undoubtedly turn against her, too. Even Quinn Forrester (Rena Sofer) could rip into Flo for ruining everything and breaking her son’s heart.

Threat Of Prison Is Real

Flo would lose her Forrester Creations job and the threat of prison will be very real. She was part of Dr. Reese Buckinham’s (Wayne Brady) stolen baby plot, which makes her a baby thief, too.

Flo’s definitely been robbing Hope of precious moments with her little girl! B&B will have a couple of options at the end of all this. They can begin the slow process of redemption or lock Flo up and put this chapter to rest.

What outcome do you want to see after Flo’s inevitable downfall? Do you think Flo should stick around and try to make amends? Would you rather see Flo in the slammer instead? We’ll give you updates as other B&B news comes in. Stay tuned to the CBS soap and don’t forget to check CDL often for the latest Bold and the Beautiful spoilers, updates, and news.