BY Heather Hughes on April 25, 2019 | Comments: one comment
Related : Soap Opera, Spoiler, Television, The Bold and the Beautiful 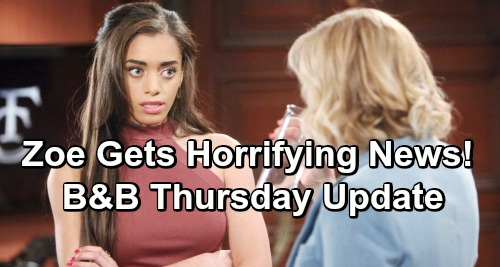 The Bold and the Beautiful (B&B) spoilers for Thursday, April 25, tease that Brooke Forrester (Katherine Kelly Lang) will drop a bomb on Zoe Buckingham (Kiara Barnes). She’ll mention that Florence “Flo” Fulton (Katrina Bowden) has been confirmed as a Logan, so Zoe will find herself in panic mode. This definitely isn’t news Zoe wanted or ever expected to hear.

Brooke will explain the shock of finding out Storm Logan (William deVry) was Flo’s father and how they welcomed her into the family. She’ll be glad Hope Spencer (Annika Noelle) feels so connected to Flo, but Zoe will try to shut that down. The last thing she needs is Flo cracking under the pressure during a bonding session.

Zoe will point out that Flo and Hope lost their babies in very different ways, so she won’t think they have anything in common. B&B spoilers say Brooke will beg to differ since they share Logan blood. She’ll believe that’s the only link they need and express joy over finding a new family member.

Across town, Shauna Fulton (Denise Richards) will talk to her daughter about the future. She’ll feel like good things are brewing since Flo’s part of the Logan clan. Shauna will even drop some inheritance hints, so her money-grubbing side will bubble up.

After Shauna takes off, Zoe will show up and explode over Flo’s father shocker. She’ll complain about Flo hanging around LA and argue that getting to know the Logans is a terrible idea. Flo will note that the Logan fam has been kind to her, but Zoe will snap that it’s because they don’t know the truth. She’ll make it clear that the baby swap would change their minds in a heartbeat.

Flo will wonder if their love for Storm would overcome their anger. She’ll consider the idea that the Logans might forgive her, but she’ll realize it’d mean taking a huge risk. Despite her intense fears, Flo will decide she has to come clean. Of course, The Bold and the Beautiful spoilers say Zoe will once again be on a mission to stop her!

Over with Bill Spencer (Don Diamont), he’ll catch Katie Logan (Heather Tom) off guard with a gorgeous engagement ring. Bill will ask Katie to become his wife once more, but she’ll reject his marriage offer. She won’t think she can take the plunge after the way Bill pursued Brooke – no matter how sweet his proposal is.

A disappointed Bill will drown his sorrows at Il Giardino, so Shauna will come along to cheer him up. The Bold and the Beautiful spoilers say their interaction will lead to trouble later this week, so stay tuned for hot drama. We’ll give you updates as other B&B details emerge. Stick with the CBS soap and don’t forget to check CDL often for the latest Bold and the Beautiful spoilers, updates, and news.