BY hellodrdavis on April 24, 2019 | Comments: one comment
Related : Soap Opera, Spoiler, Television, The Bold and the Beautiful 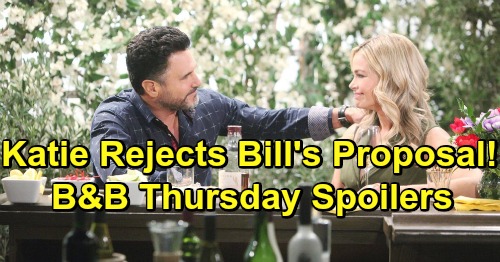 The Bold and the Beautiful spoilers for Thursday, April 25, tease that Zoe Buckingham (Kiara Barnes) will be in for a big surprise. She’ll be freshly back from a trip to England to see her father, Reese Buckingham (Wayne Brady), and she’ll be hoping that Florence “Flo” Fulton (Katrina Bowden) will have put the whole baby swap and adoption situation behind her.

Of course, Flo has been teetering on the edge of telling Hope Spencer (Annika Noelle) that she’s “Phoebe Forrester’s” (Isabella de Armas and Rosalind Aune) mother for some time now. Zoe has done her best to dissuade Flo from spilling the truth, mainly by reminding her that she stands to go to prison if the truth comes out.

But on Thursday’s B&B episode, Zoe will learn something startling. She’ll hear from Brooke Forrester (Katherine Kelly Lang) that Flo found out that she was Storm Logan’s (William deVry) daughter. That makes Flo a Logan, and specifically Hope’s cousin. Zoe won’t believe her ears when she hears the news.

In fact, according to B&B spoilers, Zoe will have a major reaction when she hears the news about Flo’s status as a Logan. She’ll reel and won’t be able to hide her shock. Of course, the news will totally frighten Zoe because she’ll know that it will make Flo more likely to spill the beans about the baby swap. Flo won’t want to keep the truth from her newfound cousin.

Meanwhile, on the new episode of B&B on Thursday, April 25, Bill Spencer (Don Diamont) will make a big proposal to Katie Logan (Heather Tom). Bill and Katie have been dancing around the subject of getting back together for a while, ever since Justin Barber (Aaron D. Spears) and Donna Logan (Jennifer Gareis) started working on them about rekindling their romance.

It looks like Bill will finally take a big step and formally propose to Katie that they give their relationship another go. He’ll likely make a heartfelt plea to her, citing how good it would be for both them and Will Spencer (Finnegan George) if they reunite and form the family that they’re meant to be.

But according to B&B spoilers, Katie won’t react well to Bill’s proposal. She’ll be kind and considerate about the whole thing, but she’ll respond with a firm no. Katie will probably be worried about the effect it would have on Will if their union ultimately didn’t work out. So, she’ll decline his offer.

It looks like Bill will be shattered, and he’ll head to Il Giardino to mope and think about the whole situation. He’ll definitely have taken a hit, and he’ll need some time to just decompress. At the restaurant, he’ll run into Shauna Fulton (Denise Richards), and the two will strike up a conversation.

Of course, B&B viewers know that Bill is not Shauna’s favorite person, but it looks like the two will be civil to each other, and Shauna may even offer Bill a little comfort in the wake of Katie’s rejection. These two may not patch things up fully, but they’ll at least be able to be civil to each other. It will be a step forward.