BY hellodrdavis on August 28, 2019 | Comments: one comment
Related : Soap Opera, Spoiler, Television, The Bold and the Beautiful 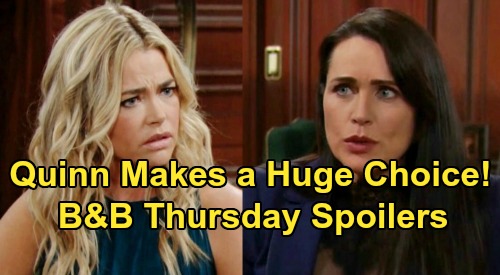 The Bold and the Beautiful spoilers for Thursday, August 29, tease that Quinn Forrester (Rena Sofer) will be on the receiving end of a huge request. As B&B viewers know, Shauna Fulton (Denise Richards) has just tracked Quinn down at Forrester Creations and is begging for her help in getting Flo Fulton (Katrina Bowden) some assistance. Flo’s in a world of legal trouble and is currently sitting in jail, unable to make bail or hire a lawyer.

Of course, for Quinn, helping Shauna is going to be tricky. Since she’s married to Eric Forrester (John McCook), she’s most likely not going to be able to overtly help Shauna and Flo, even though she may be sympathetic to their plight. Look for Shauna to confess everything that she and Flo did on Thursday’s episode, and for Quinn to be horrified but also to express some understanding of their situation.

After all, Quinn herself has made some terrible decisions in the past, and she overcame her past ways and has forged on with life. She may decide that Flo and Shauna deserve the chance to overcome what they did and be forgiven as well. According to B&B spoilers, Shauna will implore Quinn to help her get Flo out of jail and secure legal representation, since she and Flo simply don’t have the means to do so.

But will Quinn be able to oblige? After all, her money comes from Eric, and B&B viewers know that Eric is adamant that Shauna and Flo are reprehensible and deserve what they get. Perhaps Quinn will finagle some way to secretly help Shauna and Flo, but it could prove to be a challenge, since Eric’s bound to notice if a big chunk of money suddenly goes missing from their accounts to pay for Flo’s bail. How will Quinn work it out?

Meanwhile, on the new episode of B&B on Thursday, August 29, Ridge Forrester (Thorsten Kaye) will find himself furious with Liam Spencer (Scott Clifton). As B&B viewers know, Liam hasn’t been shy about his feelings toward Thomas Forrester (Matthew Atkinson). Despite Thomas’ accident, Liam harbors negative feelings toward Thomas and most definitely does not wish him well, and he’s been pretty vocal about that.

On Thursday’s episode, it seems that Liam will visit Thomas’ hospital room alone, and he’ll have a few choice words for his nemesis. Liam’s still bitterly angry with Thomas for not disclosing that Beth Spencer (River Davidson and Madeline Valdez) was alive and for manipulating Hope Logan (Annika Noelle) into marrying him. And as B&B viewers know, Liam has previously stated that he hopes Thomas will wake up so he can kill him.

Well, apparently Liam will talk to an unconscious Thomas and share his feelings of disdain with him. For Liam, this will be his chance to unload on Thomas for everything he’s done, and he’ll berate Thomas, even though Thomas is unconscious and probably can’t hear him. While this is going on, B&B spoilers say that Ridge will walk in the room and witness Liam scorning Thomas, which won’t go over well.

Of course, Ridge knows full well that Thomas has done some terrible things, and part of him would like to give Thomas a piece of his mind, too, but he’s also aware that Thomas’ life is literally hanging in the balance right now. Ridge won’t think that now is the right time for Liam to be verbally abusing Thomas, and he’ll be furious with Liam for his actions.

Look for Ridge to quickly put a stop to Liam’s one-way gripe session with Thomas and for Ridge to give Liam a piece of his mind for his actions. All Ridge wants is for Thomas to wake up and be ok, and he won’t appreciate all the negativity when Thomas’ is in such grave condition.