The Bold and the Beautiful Spoilers: Thursday, December 12 – Hope & Steffy Go All In For The Fashion Showdown – Wyatt Re-evaluates Relationship With Sally 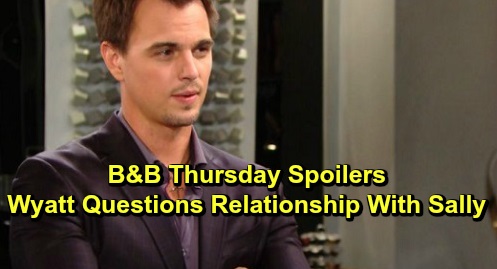 The Bold and the Beautiful spoilers for Thursday, December 12, tease that Hope Logan (Annika Noelle) will reach a decision. As B&B viewers know, she’s just been propositioned by Thomas Forrester (Matthew Atkinson) about working together on the Hope For The Future line, and now Thomas has offered up the idea of a “fashion showdown,” pitting Hope For The Future against Steffy Forrester’s (Jacqueline MacInnes Wood) new line.

And even though Hope at first protested against the idea, it looks like something will happen to change her mind on Thursday’s episode, as B&B spoilers say that both Hope and Steffy will get competitive and go all in on the idea of the fashion competition. Steffy has had Sally Spectra (Courtney Hope) working on the designs for her new line, and so it will be a Sally/Steffy team versus a Thomas/Hope team. The plan is to show off each line’s designs to a team of buyers and whichever line gets the most buys wins.

Of course, all of this was Thomas’ big idea to entice Hope to work closely and intensely with him at Forrester. He knows how competitive Hope and Steffy can be when it comes to fashion, and that Hope would surely take up an offer to revitalize her line and possibly best Steffy in the workplace. So, look for Hope to formally agree to work with Thomas on Hope For The Future on Thursday’s episode, and it will be game on!

Meanwhile, on the new episode of B&B on Thursday, December 12, Wyatt Spencer (Darin Brooks) will be feeling pensive. As B&B viewers know, he recently freaked out when Sally accidentally called him by his brother Liam Spencer’s (Scott Clifton) name. Wyatt, who seems to have some serious unresolved feelings of his own for Flo Fulton (Katrina Bowden), promptly projected all of this onto Sally, and he accused her of having feelings for Liam.

Well, as B&B viewers know, Sally really doesn’t feel anything for Liam and hasn’t for a very long time. But all of this is going to prompt Wyatt to re-evaluate his relationship with Sally. It was a bad sign that Wyatt didn’t want to elope when Sally offered to run to Las Vegas for a quick wedding, and it looks like he’ll have a lot on his mind on Thursday’s episode, as he turns to Liam for support.

We’ll see if Wyatt confides in Liam about Sally’s misspeak, but whatever the case, he’ll let his brother know that he’s rethinking his relationship with Sally, and that things quickly went from easy and fun with her to extremely complicated. Hopefully, Wyatt will get honest with himself and realize that he’s still very much in love with Flo. Perhaps Liam will help Wyatt to figure out what his next move should be.