BY hellodrdavis on December 11, 2019 | Comments: one comment
Related : Soap Opera, Spoiler, Television, The Bold and the Beautiful 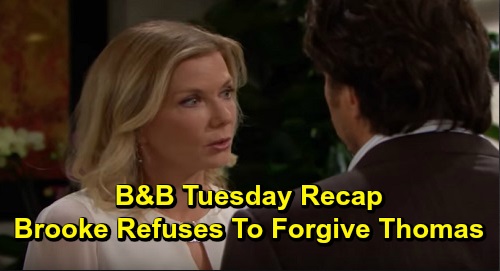 The Bold and the Beautiful spoilers recap for Tuesday, December 10, reveal that Brooke Forrester (Katherine Kelly Lang) told Ridge Forrester (Thorsten Kaye) that despite their vow that nothing would come between them, Thomas Forrester (Matthew Atkinson) has done so. She stated that she couldn’t accept Thomas back after what he did to Hope Logan (Annika Noelle), and that she didn’t think she could ever forgive him.

Brooke then launched into a rant, saying that Thomas needs help, is dangerous, and that she doesn’t want him back in the family. She even blasted Thomas for signing over half of his rights to Douglas Forrester (Henry Joseph Samiri), which Ridge couldn’t believe. Ridge begged Brooke not to do this and tear them apart. Brooke said that she didn’t want a divorce, but if saving the marriage meant forgiving Thomas, then she didn’t have anything more to say.

Brooke and Ridge continued to go back and forth over familiar territory, and Brooke once again brought up Emma Barber (Nia Sioux) and her death, which irritated Ridge. Ridge insisted that Thomas had made mistakes but that he was working on himself, but Brooke wasn’t having it. She ultimately said that Ridge needed to support her, and that he needed to believe her viewpoint on Thomas.

Meanwhile, Shauna Fulton (Denise Richards) continued her conversation with Quinn Forrester (Rena Sofer) at the Forrester mansion. They talked about Shauna’s disappointment that Ridge was going to try to work things out with Brooke, and they noted that Brooke is no paragon of perfection, even though she blasts Thomas for his misdeeds.

Shauna rehashed her history with Ridge, since the moment she came to Los Angeles, and noted that she really thought things with him were going somewhere. Shauna noted that she has already told Ridge that she loves him, and Quinn pointed out that he didn’t run for the hills afterwards, so that was a good sign. Shauna thought that it was all ending today…that is, if Brooke can forgive Thomas.

Next, at Forrester Creations, Steffy Forrester (Jacqueline MacInnes Wood) called out Thomas on using Douglas to try to get closer to Hope. She wondered if his move to resurrect Hope For The Future was really about business or if he just wanted Hope for himself. Thomas insisted it was a business move, and that if something ultimately happened between himself and Hope then it would be because he was a better person.

Steffy was quick to point out that a line’s relaunch was a major decision that she and Ridge would need to make together, and that Thomas’ designs could be paired up with another line. She went on to say that Hope doesn’t even like him and is only playing nice because they’re sharing Douglas, and that he’s deluding himself if he’s pinning his future on Hope.

Thomas admitted that he still loved Hope, and after Steffy left the room, Thomas looked at Douglas’ Hope For The Future drawing and told himself that Hope would come back to Forrester and see that they’re meant to be. He then took a marker and crossed out the “the” of Hope For The Future and changed it to “our.”

Finally, at Spencer Publications, Liam Spencer (Scott Clifton) expressed his concerns to Hope. Hope wanted Liam to support her career, and Liam pointed out that he totally supported her going back to Forrester but objected to the Thomas part of the package. Liam then learned that both Thomas and Douglas made a pitch for her to return, which exasperated Liam. He wondered how Hope couldn’t see that Thomas was using Douglas to manipulate her again.

But Hope insisted that she knows better than anyone what Thomas is capable of, and that there was something about this time that was different. Liam disagreed, saying that Thomas was still after her, and that every move he makes is a means to that end. Hope replied that it didn’t matter because she’d never want to be with him. Liam ended by saying that he strongly objected to Hope working with Thomas again, and that he couldn’t see it ending well.