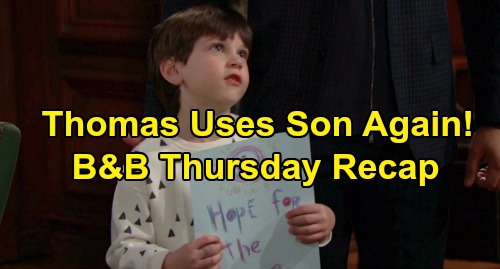 The Bold and the Beautiful spoilers recap for Thursday, December 5, tease that Thomas Forrester (Matthew Atkinson) was sketching at Forrester Creations while Douglas Forrester (Henry Joseph Samiri) was coloring. Douglas thought that the best part about Thanksgiving was getting to see Hope Logan (Annika Noelle), and he wondered if he could see her today. Thomas replied that they might be able to, if he did that “little special assignment” that they had agreed upon.

Liam Spencer (Scott Clifton) then entered and soon Douglas went off with Pam Douglas (Alley Mills) for the special assignment, leaving Thomas with Liam. Liam then proceeded to call out Thomas on what he’s really up to and on what happened in the storage area. Liam griped about how Thomas tried to teach Hope a lesson by showing her that good people do bad things, exasperating Thomas, who argued that it was not a calculated plan.

Liam then proclaimed that Hope wasn’t going to forgive Thomas anytime soon, with Thomas replying that Liam underestimates Hope’s ability to forgive. Liam thought that Thomas was deluding himself, and that Hope wasn’t even going to be around Forrester since she wants to spend more time with Beth Spencer (River Davidson and Madeline Valdez). That seemed to take Thomas aback.

Meanwhile, Steffy Forrester (Jacqueline MacInnes Wood) arrived at the cabin to see Hope, who was reading to Beth. After Hope put Beth down for a nap, she and Steffy talked about what happened at Forrester with Thomas. Steffy called out Hope for thinking she killed Thomas but staying quiet and keeping it from her and Ridge Forrester (Thorsten Kaye). Hope said that if she could go back, she would.

Steffy then mused that Hope is fallible “like the rest of us,” since she purposely withheld the truth, and Hope explained about how things spiraled out of control and that she was worried that night about finding Douglas. Steffy didn’t buy it, and Hope wondered if Steffy thought that she was responsible for Thomas’ bad behavior. Steffy said no, but that Hope had also manipulated Thomas into signing over half of Douglas to her.

Steffy went on to say that she has a real problem with Thomas giving custody of his son to anyone, even though she knows that Hope and Douglas love each other very much. Steffy then said that she thinks Hope manipulated Thomas and used his feelings to get partial custody of Douglas. Hope just stood there looking guilty.

Next, Liam returned to Spencer Publications and tried to work, but was still upset after his run-in with Thomas earlier. Steffy arrived and quickly sensed that something was wrong. Liam revealed that he saw Thomas earlier and was still irritated about it. He noted that Thomas was delusional, and that Hope just wants to be home with Beth.

Finally, Hope stopped by Forrester Creations to see Thomas. Turns out, Thomas texted her and asked her to come so he could unleash a big surprise on her. Thomas got on the phone and told Pam that “we’re ready,” and three models came in wearing new designs. Thomas explained that these were previews of the latest designs for Hope For The Future.

The models then showed off the designs, and it was pretty clear that Hope liked what she saw. After the models left, Thomas said that he thinks he’s onto something here with Hope For The Future, but that he really needed her as the creative force to return. He told Hope that she was the inspiration of the line, and that the line needs her.

Just then, Douglas ran in the room and was thrilled to see Hope. Clearly prompted on what to say, Douglas asked Hope to return to Hope For The Future, saying that his dad worked so hard designing all these dresses. Hope kindly told Douglas that right now, she wanted to spend some time at home looking after Beth, to which Douglas replied, “Do it, Mommy, come work with Daddy!”